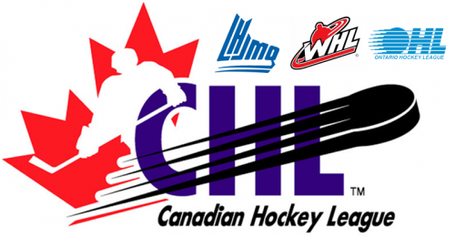 With the Panthers all but locking up a Top 5 pick in the draft, we once again take a look at the top ten CHL prospects and where they now stand after the first round of the CHL playoffs. (Look here to see the pre-playoff round up.)

1) Aaron Ekblad - Ekblad led the Colts in their 4-1 series victory over the Sudbury Wolves. Ekblad played games 1-4, and went 1-2-3 with a (+/-) of 0. Ekblad missed Game 5 due to a lower body injury. Overall, nothing impressive from Ekblad. Just the same ole, same ole that he has been doing every since he joined the OHL back in 2011-2012.

2) Sam Reinhart - Reinhart's Kootenay Ice won their series over Jake Virtanen's Calgary Hitmen 4-2. Reinhart posted an absurd 5-12-17 in 6 games, with a (+/-) of 6. Reinhart led Kootenay past Calgary, averaging almost 3 points a game. Exceptional performance from someone who will be an exceptional NHL forward.

3) Sam Bennett - Bennett's Frontenacs fell to Nick Ritchie and the Petersborough Petes, 4-3. Bennett went 5-4-9, with a (+/-) of 2. Bennett definitely showed the compete level expected of him, though it occasionally got the better of him, as he had 18 PIM in the 7 games. With maturity will come the cooling of temper that can lead to less PIM. Overall though, Bennett did not play bad. He didn't necessarily shine, either.

4) Michael Dal Colle - Dal Colle led the Oshawa Generals to a 4-0 sweep of the Mississiauga Steelheads. Dal Colle went 5-5-10 in 4 games with a (+/-) of 1. Dal Colle averaged a little over 2 points a game, and demonstrated the scoring flair that compliments his size and skating and makes him such an enticing forward in the upcoming draft.

5) Leon Draisaitl - Draisaitl's Prince Albert Raiders went down 4-0 to the Edmonton Oil Kings. Draisaitl went 1-2-3 in 4 games with a (+/-) of 1. Nothing impressive from Draisaitl. His team was heavily outmatched, and his production shows.

6) Brendan Perlini - Perlini and the Niagara Ice Dogs fell to the North Bay Battalion 4-3. Perlini went a pathetic 0-1-1 with a (+/-) of -2. Even a small boost of offense from Perlini would have lifted 7th seeded Niagara to the upset over 2nd seeded North Bay. He failed to deliver, raising questions about his ability to perform under pressure, and of his compete level.

7) Jake Virtanen - Virtanen's higher seeded Calgary Hitmen fell to Sam Reinhart's Kootenay Ice 4-2. In the 6 games, Virtanen went 1-3-4 and had a (+/-) of -2. Virtanen was almost nonexistent in this series, while his 2014 draft counterpart made his presence known almost every time he stepped on the ice. Virtanen did the opposite of what he needed to; he backed down, and appeared to crumble under the playoff pressure.

8) Haydn Fleury - Did not qualify for playoffs.

9) Joshua Ho Sang - Ho Sang and the Windsor Spitfires fell to the London Knights 4-0. Ho Sang went 1-2-3 in 4 games with a (+/-) of -10. Ho Sang and the Spitfires got demolished by the Knights, with only one game being decided by 1 goal. Ho Sang isn't necessarily to blame, as the defense for Windsor seemed to fall apart in the games. Still, his team needed him to produce more than a paltry 3 points.

10) Nick Ritchie - Ritchie and the Petersborough Pete's defeated Sam Bennet's Kingston Frontenacs 4-3. Ritchie went 5-3-8 with a (+/-) of 0. Ritchie also scored the OT winner in Game 7 of the series. Ritchie demonstrated what we already knew; he's a big body that can skate and score. He contributed as was needed to get the Pete's onto the next round.

With the change in the draft stock of certain prospects, my ranking of CHL prospects changes slightly. The updated rankings are thus. (Previous rankings shown next to player name.)

Notes: Ritchie's stock didn't increase, but those above him fell. Dal Colle and Bennett as well as Reinhart and Ekblad seem to be interchangeable for the 3-4 and 1-2 spots, respectively. Teams will most likely draft by need concerning those positions.

These aren't official; just my own personal rankings. It will be interesting to see how ISS, Future Considerations, and NHL Central Scouting rank these players headed into draft day.