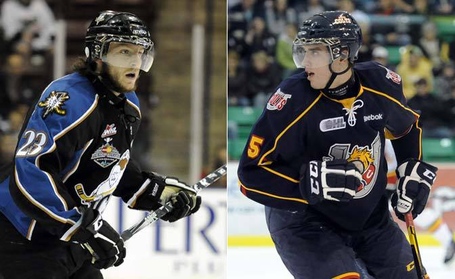 As the NHL Draft looms, we take yet another look at the top CHL prospects, though with the brackets shortened to only 12 teams across the three leagues, most of our prospects are currently out of action, with only Michael Dal Colle and Nikolaj Ehlers remaining out of the Top 10 from the CHL (per ISS Scouting). (For the first update, look here.)

(Quick Notes: Josh Ho-Sang fell out of the Top 10 after his dismal playoff performance with the Windsor Spitfires. Rankings taken from ISS Scouting)

1) Sam Reinhart - Reinhart tried in vain to save his year Kootenay, but fell in 7 games to the Medicine Hat Tigers. Reinhart had 23 points (6-17-23) in 13 games, and was +4 with only 2 PIM. Reinhart had little help in this series, as only his linemates managed more than13 points in both series. His play clearly impressed the scouts at ISS, as he jumped over Aaron Ekblad in their current rankings. He won't be playing at the u18 World Championships this year, as he missed the start of them while playing with Kootenay.

2) Aaron Ekblad - Ekblad and the Colts fell to the extremely defensive North Bay Battalion in 6 games, as North Bay's 92% penalty kill was enough to smother Barrie's powerplay throughout the series. Throughout the playoffs, Ekblad had 6 points (2-4-6) through 9 games, while being -4 with 14 PIM, which isn't particularly impressive. The vast majority of Ekblad's points in the regular season, however, came on the powerplay and to have that nullified by North Bay's penalty kill, and the fact that Ekblad has little to no offensive help, could contribute to those numbers. Unfortunately, the CHL does not track TOI stats, and thus it's difficult to see just quite how effective Ekblad was for Barrie without looking at full game film. His play wasn't necessarily bad; Reinhart was just impressive enough to jump him in ISS Rankings. Ekblad also won't be playing at the u18 World Championships.

3) Michael Dal Colle - Dal Colle continues to lead the cruising Generals, as they swept the Petersborough Petes in their second round series. Dal Colle so far has 16 points through 9 games (Game 1 of the series against North Bay was last night) (5-11-16) and is +3 with 0 PIM. Same as Ekblad, Dal Colle is a heavy powerplay producer (his (+/-) indicates this to a degree) and it should be interesting to see whether or not Dal Colle and the Generals will be able to continue their powerplay success that drove them through their first two series, as North Bay has that exceptional penalty kill that nullified Aaron Ekblad. Dal Colle has been good enough to jump NHL Central Scouting's #1 skater, Sam Bennett, in the ISS Rankings. The question is whether or not he'll be able to continue even if his powerplay is taken from him in this upcoming series. He won't be playing at the u18 World Championships, as his playoffs are still going.

4) Sam Bennett - Bennett had been eliminated from play in the first round, though he impressed scouts enough to jump to NHL Central Scouting's #1 skater. He will be missing the u18 World Championships, however, due to injury. We'll see if his draft stock changes with the performances of other players prior to draft day.

5) Leon Draisaitl - Draisaitl had been eliminated in the first round as well, and is too old for the u18 Worlds, so similar to Bennett, we won't be seeing much of Draisaitl until draft day.

6) Brendan Perlini - Perlini was eliminated in the first round. He will take part in the u18 Worlds, and it should be interesting to see if he can overcome his dismal playoff performance and raise his draft stock before draft day.

7) Nicholas Ritchie - Ritchie and the Petes fell to Dal Colle and the Generals in 4 games. Ritchie ended his playoffs with 10 points (5-5-10) in 11 games, while going -5 with 24 PIM. Ritchie showed his power forward skills, putting up goals and playing physical throughout both series. He won't be playing at the u18 World Championships.

8) Jake Virtanen - Virtanen was eliminated in the first round by Reinhart's Kootenay Ice. Virtanen will be playing in the u18 Worlds.

9) Nikolaj Ehlers - Making his first appearance in the top 10 is Ehlers, the only player from the QMJHL. Ehlers and Jonathan Drouin lead the defending Memorial Cup Champion Halifax Mooseheads so far, as they've beaten Charlettetown (4 games) and Gatineau (6 games). So far, Ehlers has 21 points (9-12-21) through 12 games, while going +4 with 8 PIM. Halifax has had trouble with their newest opponent, Val-D'Or Foreurs, as they have lost their first 2 games in that series. If Ehlers can step up, he may be able to even further increase his draft stock headed into the draft.

10) Haydn Fleury - Fleury did not qualify for the playoffs, but is playing in the u18 Worlds.

Rankings - These personal rankings are my own, not associated with any scouting service. My previous rankings are shown next to the current ones.

Notes: The rankings don't change, besides the insertion of Ehlers at number 5, and the dropping out of Josh Ho Sang. I've been incredibly impressed with Ehlers's play, even if his stats may be inflated by playing with Drouin. Besides that, I have seen no amount of play that would result in the changing of the rankings, though the finale of the CHL postseason and the World Championships may change that. Also, the top 4 may be interchangeable come draft day based on team needs.