The Upper Deck of the BB&T Center: A new perspective

The Florida Panthers will close off sections of seats on one of the end zones in the arena. Sunrise Sports & Entertainment has finally faced the reality of the market but can they go further and seize the opportunity to transform the arena atmosphere?

Share All sharing options for: The Upper Deck of the BB&T Center: A new perspective

The Florida Panthers will enter the 2014-15 campaign full of changes from top to bottom and this wave of change has been brought on by the sale of the team to Vinny Viola and Doug Cifu just before the start of the 2013-14 NHL season. On April 8, 2014 SSE president and CEO Rory Babich announced that the team will reduce capacity at the BB&T Center to 15,700 for hockey games. This is a change from the 17,040 the team had set as the capacity in 2010, a drop down from the total full capacity of 19,250. By reducing the capacity to this lower number, the team is slightly above the 14,703 max they had in the Miami Arena. What SSE is doing is not unprecedented and other teams in this market and sports in general have also made the move to reduce seating capacity. 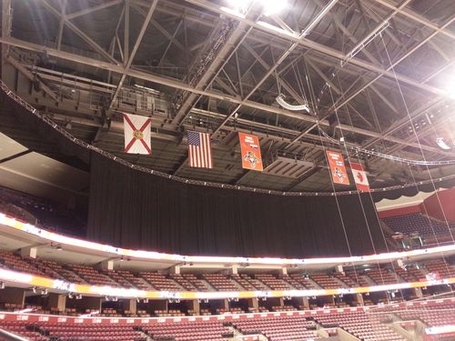 The Miami Dolphins will be renovating Sun Life Stadium and in turn will be reducing capacity, especially in the upper deck, to reflect the changes brought about by less demand due to team performance and the advent of high definition television, making watching the game from home a cheaper and more enjoyable experience for some. When the Miami Marlins opened Marlins Park in Little Havana in 2012, it became the smallest ballpark in terms of capacity in Major League Baseball with just about 37,000 seats. When the team realized their performance and moves had made it impossible to sell a little more than half of their seats on average, they reduced capacity for weekday (Mon.-Thurs.) games by shutting down the upper deck, a move they had also made during the last two years of their tenure at Sun Life Stadium. When it comes to reducitions, only the AmericanAirlines Arena in Miami has not done so, but its location in downtown Miami and the strong performance of the Miami Heat throughout their tenure there has allowed capacity to stay in the range of 19,000 to 20,000 people. 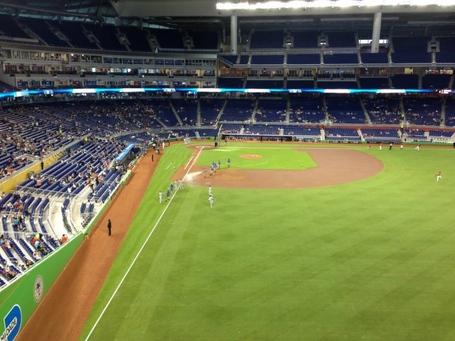 To me this move by the Panthers was inevitable. With only two postseason appearances in the sixteen years the team has played at the BB&T Center, the market in South Florida has finally had enough of the losing, with the 2013-14 season finishing with the lowest average attendance since the move to Sunrise. To me this reduction in capacity does not have to be viewed as a negative occurrence but as an opportunity to help make the BB&T Center a more intimate and enjoyable hockey experience. Closing an end to the upper deck brings fans closer and helps to create that close-knit atmosphere of a large crowd. The BB&T Center at its fullest for hockey is ranked 6th largest in the NHL and the arena is the biggest in the state of Florida. The capacity is ahead of more established hockey markets in Boston, New York and Toronto. The building is too big for the market as it is now. The era when it was built, 1998, was different and the Panthers need to change their approach to filling the seats to reflect the reality of today.

The changes I have seen to the BB&T Center in the past few years have started to bring it more in line with other modern arenas and stadiums. The reupholstering of the lower bowl to change it from green to red was a good aesthetic decision. The new flooring was a sound investment, along with new food options in the concourse. Club Red is a delightful experience, but the reality of the situation that the seating section hurts the team's image and was too exclusionary has forced SSE to scale it back and make it more affordable and less of an eye-sore. The LED video ribbons that wrap around three levels of the arena are a welcome visionary touch that is made exponentially better with "Big Red" the scoreboard and the new game presentation equipment. Pantherland going from a tiny little shop to a much larger team store with more merchandise to choose from has also given the arena a major league boost. Regarding the upper deck there seems to be untapped potential that the reduction in capacity could take advantage of. 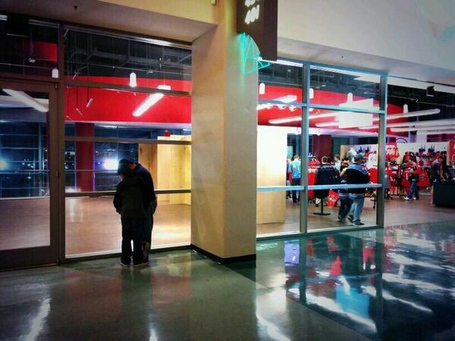 Right now the upper deck currently offers a kids’ play section, complete with arcade games and such, a mini Pantherland team store, typical stadium food options in the concourse and a couple of food kiosks. (edit: the kids section was replaced by the mini Pantherland store). Yet when walking the concourse there are empty spaces where other food or merchandise options could reside that should be filled. It just looks sad to see those empty spaces used simply as storage space or an abandoned home. Now regarding the closed sections of seats is a more ambitious plan that I hope the team has pondered about. Using a curtain or tarps to reduce capacity is not exactly encouraging when it comes to the team’s image. It is already a point of ridicule used by opposing fans and relocation advocates. My idea is to completely gut that end and create a large standing room/concessions plaza in the upper deck. If there is one thing the BB&T Center lacks it is the ability to go get food or drinks during the game without having to miss the action in there non-premium seating areas. It is an idea that is currently in use in other arenas and stadiums in professional sports. In fact there is an example of it in the BB&T Center called the Duffy’s Sky Club, though that is only limited to fans that have seats in the club sections. 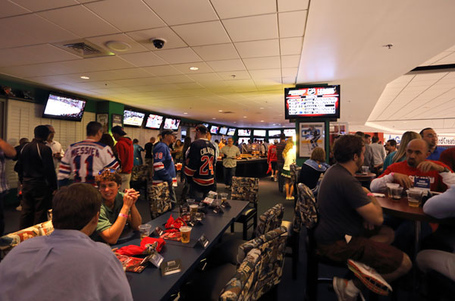 The closest local example is the Budweiser Bar in left field of Marlins Park. It is an area where fans have seats elsewhere but can choose to watch the game from the bar, get a drink, and still not miss the action happening on the field. In New York's Madison Square Garden, they just completed a three-year, one billion dollar renovation that included bridges that hang on the ceiling which includes seats and a walkway with connections to the concourse so fans could peruse the arena while still being to watch the game from a new perspective. The United Center in Chicago created the "Madhouse On Madison" in the 300 level which provides fans in the those sections easy access to food options and bars and the ability to watch the action on the floor while up and about. Seattle’s most recent arena proposal has a design that includes balconies in the upper deck that are stacked inward towards the playing surface. In fact, the entire design philosophy is meant to bring people closer together as a community and thus create a better home advantage. Even Tropicana Field in St. Petersburg, the former home of the Tampa Bay Lightning, was able to renovate to allow fans to peruse the entire outfield without having to miss the on-field action and create a new bar plaza in center field. 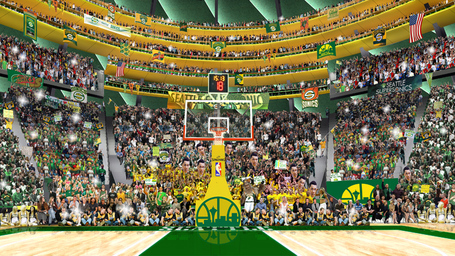 Hopefully there will come a day when curtains and tarps will not be needed for a Panthers home game. I believe the organization is smart in trying to artificially reduce capacity in order to address the current realities of the market, but also believe that an opportunity to make the arena experience better awaits them. The upper deck can be redesigned to include standing room only balconies with all the amenities that fans have come to expect in a big league venue in today’s age. They also have a chance to make the cavernous BB&T Center a much more intimate and engaging experience.