The LBC crew put their fashion sense to the test in an attempt to create the NHL's next uniform sensation. In Part One, the resident graphic designer throws his hat into the ring and calls for a complete overhaul of the Panthers brand identity.

Share All sharing options for: The LBC Third Jersey Factory: Part One

The Florida Panthers have had three alternate uniforms in their history. The first two were just navy and red variations of their primary uniform set with the "Leaping Cat" breaking a stick logo as the crest. In 2009 they introduced a new alternate uniform that was different then their primary set and featured a new crest and shoulder logo. This design was met with mixed to negative reviews as it was seen as a false attempt to create antiquity to the Panthers logo and introduced a color scheme that was more corporate inspired than hockey inspired. Since 2013 the Panthers have not had a third jersey. New uniforms typically take about 18 to 24 months to design except for special circumstances, like when the Panthers went to a primarily red uniform in 2011 though it was essentially a color swap of the navy uniform.

I have covered the concept of the alternate uniform before in my four-part series (1, 2, 3, 4). The development of a new uniform should not be taken lightly or you might wind up with a uniform as horrendous as the Buffalo Sabres third jersey introduced in 2013-14. It looks to me that the Sabres and Reebok failed to consult any outside opinion while creating their uniform. It also looked to be a uniform created without any purpose other than to see what they could get away with on a jersey (or sweater for you hockey xenophobes).

The current lack of a third jersey got the juices flowing in my mind grapes and I wanted to see if I could develop a new uniform set that was more than just a color swap and some new stripes. For those of you who do not know, I developed the concept of the Litter Box Cats logo. It was used for the 2011-12 season, then reformatted (thanks to the LBC crew) in late 2012 to match the SB Nation roundel theme by another graphic designer.

However, when consulting the other LBC writers about my idea, it seemed that each one of them had a different opinion on what a new Panthers uniform should look like. Thus, rather than just showing off my ideas, I decided to create a set for each writer and let the readers and fans see how difficult it is to create a uniform for a National Hockey League team, let alone a do re-brand of most of the designs.

I had some parameters to set before letting these guys loose with ideas. I urged sticking to four options to use for the crest. Teams usually develop a new logo or have a script to place in the center of the jersey that is different than their primary set. I developed three logos, two of which are my intellectual property and one a vectorization of concept art from 1993 for the Panthers logo that was not used (obviously I claim no ownership to that logo). The leaping cat does make a reappearance for one person's design however.

The shoulder logo was open to any logo the Panthers have used in their history as well as a new one that I developed too. There is also the option to use no shoulder logo at all.

Stripes and colors were open to anything and I asked the writers to give me an example of what they wanted based on other team designs, and then I would create a variation of it.

To start, I will show off my designs and explain my inspiration for each design. For those of you who may get hot and bothered that I would dare throw away the leaping cat, stick and tree, and exact color scheme in all of these I will tell you that I like the team's look (not love) but I believe it is time for a complete change. The only thing that identity has been synonymous with is losing. If the team does consider changing anything or everything regarding the brand image I would completely understand and be behind it. Even the "Happy Cat" logo and FLA sun logo of the failed "JetBlue" jersey tried to associate itself with the 1993 logo set, which only added to its design flaws.

My issue with the "Leaping Cat" primary logo is the sheer amount of details, which makes the logo too busy. This makes it tough to recreate in other formats. The leaping cat when made smaller, when embroidered, and even at center ice is a nightmare to reproduce. If any of you have a Panthers hat, especially the Panthers 2012 Southeast Division Champions hat, you will see what I mean. This is not an unprecedented issue, as it was one of the reasons the Florida State Seminoles changed their logo. There is a lot more success and sentimental value behind FSU's old logo that the Florida Panthers can ever dream of having. But even so, Florida State scrapped it and the Panthers can do the same with the leaping cat. Leaving behind the leaping cat (and even the whole design identity) may signify a change for the better and this team, and its fans, can finally stop reminiscing so much about the early years (1993-2000). It's time to move on and focus on the present and make a better future. Not through words but through actions. Don't worry, we can keep the color red at least, as well as the rats.

Most of my new designs have a Florida heritage connection. I believe there has to be a development of pride in being a Floridian despite the fact that most of us in South Florida hail from someplace else, whether it be the Northern U.S.,Canada or Latin America. I know a lot of our readers, myself, and even the Panthers' new ownership all come from someplace outside of the state. We are a unique population and all groups have had some hand in shaping South Florida to what it is today over the past 500 years. A lot of the people have pride in where they came from, but we are all here now and it is time for us to associate ourselves as Floridians. People make fun of us, yet they are also jealous of us. Folks come to visit or work and wind up staying and starting their family here. The Panthers logos and uniforms should reflect Floridian pride.

This design is inspired by many things. The sash design is a look never seen in the NHL and would definitely be a new take on the modern hockey jersey. Its inclusion is inspired by formal military uniforms such as those used at West Point. The shield is an homage to Florida's European roots as a Spanish colony in mimicking a coat of arms.

The Panther head is in a profile position and is facing left as the NHL teams whose logos are not letters and face left tend to be more successful than those who face right (yes, I researched every little detail in creating these). There are two versions of it that can be placed with or without a shield. The difference is in the eyes, one is more "cartoon"-esque, the other more feral, thanks to a suggestion from an LBC writer (more on that in part two). This is the way many logos are going nowadays. Less is more, as seen by the recent changes to the Lightning, Predators and Kings logos.

The Sun shoulder logo is inspired by the Flag of Muskogee and is an homage to South Florida's Seminole and Miccosukee tribes. I designed that logo with an emphasis on the Sun's heat which the Hockey Stick and Palm Tree logo fails to emphasize. South Florida's sweltering heat is something to be feared and the angry panther face is helps to drive that point home. I designed it so that it can be reproduced in any way, shape or form. When it is shrunken, the logo gives off a vibe like it is glowing with heat. That is intentional. It also may get the young adult generation of Panthers fans like me (the ones who are vital to the team's long-term survival) to remember the angry sun from Super Mario Bros. 3.

The colors used in the navy blue design are slight variations on the Panthers current color scheme. The second swaps the colors and removes navy for black and adds a gold shield for a more Floridian color scheme ala the Miami Heat.

This set uses the same logos but opts for the Panthers current color scheme with a stripe pattern that is similar to the flags of the Seminole Tribe of Florida and the Miccosukee Tribe of Indians of Florida (and yes, their flags are similar to Germany).

This set uses a logo that the Panthers have in the Den of Honor as one of the original concepts when they developed the current (only) primary logo. I decided to vectorize it and marry it with a sun in the background and pay homage to the Miami Screaming Eagles. The Screaming Eagles were a charter World Hockey Association (WHA) franchise that never took flight in South Florida due to ownership troubles and instead opened up shop as the Philadelphia Blazers. I took the Blazers original color scheme and uniform to create a fauxback WHA-inspired uniform.

The final set is based on a more conservative but still historically-inspired NHL uniform design. The stripe pattern is somewhat inspired by the NHL All Star uniforms from 1964-72. The crest is an abstract Panther head that is made to show it as a noble creature and draws some inspiration from the defunct Kansas City Scouts logo. This Panther head also addresses the clutter issue that the archaic leaping cat has with a simpler design that is still unique and still very much a panther. It can be used with or without the seal. 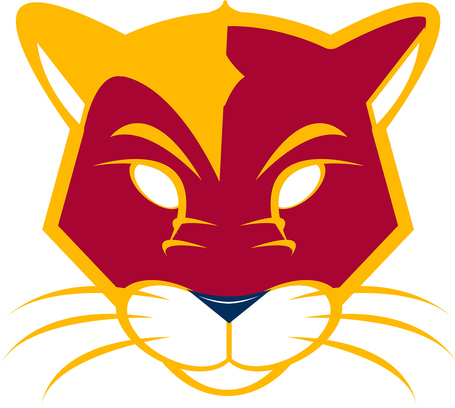 The surrounding roundel is meant to mimic the Florida state seal but with team name inscribed in Spanish to pay homage to South Florida's massive Latin American community (of which the Panthers have grossly failed to market to). The shoulder logo remains as the Panther-faced sun.

So there you have it. I hope that all of you reading this enjoy my designs or at least some aspect of them. It took me more than a month's worth of hours,from researching, to designing, to writing about them, to put these together. Graphic design is not an easy task if you truly care about the work you put out. Vote in the poll below and let me know in the comments if you agree or disagree with my argument that the Florida Panthers should develop a new brand identity.

In part two, you will see the designs that my fellow writers have cooked up.