Eye on the Panthers: Vincent Trocheck

An infographic on the exciting kid who could be breaking hockey's glass ceiling very soon.

Share All sharing options for: Eye on the Panthers: Vincent Trocheck 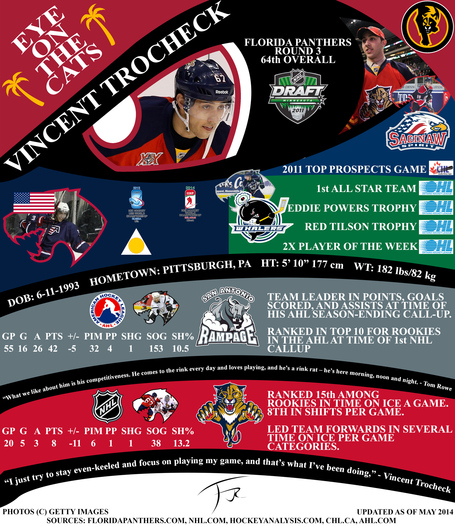 Vincent Trocheck is not the big center that the Florida Panthers have been coveting (and trying to hoard via the draft) since Dale Tallon took over as general manager. However, since being selected 64th overall in the 2011 Entry Draft, he has been overcoming the obstacles in front of him and become a dynamic young center that has picked up a few accolades in his journey to the National Hockey League.

After tearing up the Ontario Hockey League and earning that league's MVP award in 2013, Trocheck signed his first pro contract and was sent to San Antonio to develop his game in the American Hockey League. His 2013-14 season started off hot in the AHL before he was brought back down to earth by injuries and opponents making adjustments to counter his effectiveness. Once he made some adjustments of his own, his play returned to a high level, earning the 20-year-old Pittsburgh native a call up to the big leagues, where he has made the most of his opportunity.

Many Panthers fans will tell you that using the eye test it seemed like Trocheck was everywhere on the ice, whether it was offense, defense, or special teams. The young pivot was like the Energizer Bunny, and it was obvious that despite having difficulty in the face-off circle, departed interim head coach Peter Horachek trusted him in any situation. It is tough to quantify his stats in a small 20-game sample, but Trocheck led the Panthers in many average time categories.

For those looking for the sabermetrics check this out.

The main question many Panthers fans pose is this: is the team rushing Trocheck and the other youngsters into the lineup before they are truly ready for the trials and tribulations of the NHL? Trocheck's season-ending stint left an impression and should help his cause in making the Cats' roster out of training camp in 2014-15. If he earns a spot, it will be interesting to see if they choose to send him back down to San Antonio instead, to see if he can tear up the AHL and show, once and for all, he is truly NHL-ready.