Eye on the Cats: Brian Campbell

Florida's defensive quarterback continues to be a workhorse on the ice.

Share All sharing options for: Eye on the Cats: Brian Campbell 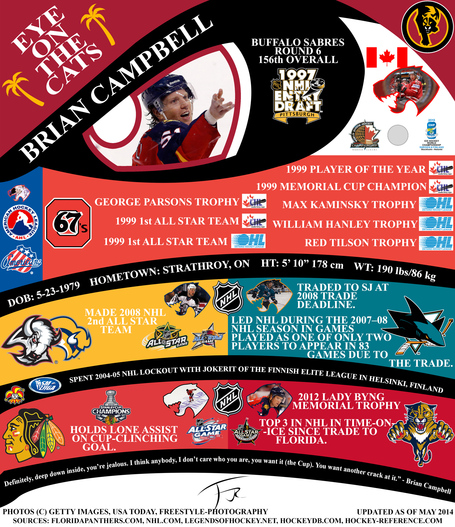 Brian Campbell has been setting the tempo of the Florida Panthers offense since his trade from the Chicago Blackhawks. Dale Tallon had signed him as a free agent in 2008 to join the Blackhawks as part of his Chicago "blueprint". In Florida, the story was supposed to be slightly different with Campbell providing a veteran presence and filling the top offensive-defenseman role until he was eventually replaced by a young, home-grown successor. That has not happened yet and it is difficult to determine which, if any, of Florida's top blue line prospects can fill this role or if Tallon must search elsewhere for his eventual replacement outside of the organization.

In 2011-12, Campbell  was at the top of his game, as he led the NHL in time on ice while spending only six minutes in the penalty box. He recorded 53 points, thanks to his ability to quarterback the power play and having a blue line bombing partner in Jason Garrison. This would help the Panthers narrowly squeak into the 2012 Stanley Cup Playoffs as the Southeast Division Champion. After the season, he was awarded the Lady Byng Memorial Trophy for his high level of gentlemanly play. The man they call "Soupy" became the first defenseman in 58 years to win that honor.

Since then, the 34-year-old has continued to be a minutes-eater, as he still ranks among the top 3 in the NHL in time on ice. However, his play comes under attack by some Panthers fans who were spoiled by his 2011-12 performance. The Panthers have been in the league's basement the past two seasons and fingers need to point somewhere. Campbell is not a shutdown or a stay-at-home defenseman. His offensive specialization makes him prone to defensive lapses. This is why the Panthers must find Campbell a worthy partner to do two things: 1. lighten the defensive load on Campbell and 2. be a force on the power play.

The pairing with Garrison in 2011-12 was a match made in hockey heaven, a booming slapshot that was fed by Campbell's sweet passing. However, Garrison's departure to Vancouver created a void that GM Dale Tallon has yet to fill. The laughable experiment of using Filip Kuba in the 2013 lockout-shortened season was disastrous. The signing of Tom Gilbert and his subsequent solid play in 2013-14 helped Campbell out a bit and could become a longer-term partnership if Gilbert is re-signed this offseason.

I, for one, do not criticize Campbell for being out on the ice too long. He is working his butt off more than most other players in the league, especially when compared to his own teammates. Brian Campbell deserves to be cut some slack and also needs a proper defensive partner that can both make up for his defensive shortcomings and to complement his offensive prowess.