Eye on the Cats: Jonathan Huberdeau

Share All sharing options for: Eye on the Cats: Jonathan Huberdeau 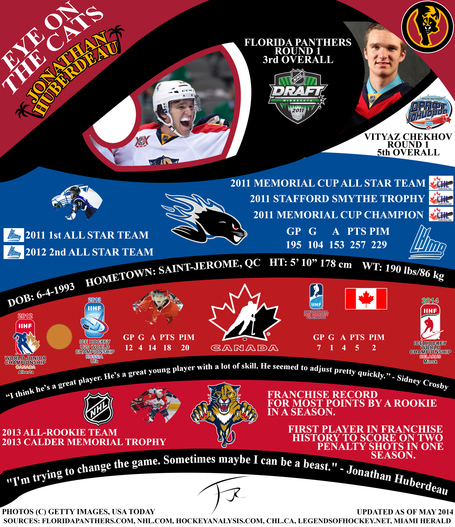 When Jonathan Huberdeau won the Calder Memorial Trophy in 2013, the first Florida Panthers player to win the National Hockey League's Rookie of the Year award, he suddenly was shouldered with the weight and responsibility of earning such a high honor. The distinction carries with it pressure to live up to even loftier expectations then he had when he was selected as the third overall pick in the 2011 Entry Draft. For Panthers fans, it was tough to avoid doing so. Huberdeau's performance in the lockout-shortened 2013 season was the lone bright spot in a dismal campaign that saw the Cats become the worst team in the league for the first time in franchise history. The kid known as "Huby" was one of the only players that fans could hang their hat on after tasting a small sip of success in the 2011-12 season and expecting anything other than another bottom-dwelling finish. Huberdeau's sensational season did come at a price, as he needed off-season hip surgery. Unfortunately, the complications of this would carry over into the 2013-14 season.

Huberdeau was able to recover enough to start his second season in Sunrise. However, it became clear that he was not quite the same player he was in 2013. This was a result of a couple of factors. The hip surgery hindered his ability to put on size and weight during  the off-season, which meant that his frame was still that of an older teenage boy. Compared to his new and younger teammate, Aleksander Barkov, Huberdeau looked pretty scrawny. This lack of size affected his ability to handle the puck and go toe to toe with the bigger foes of the NHL.

Speaking of foes, the rest of the league now had an entire off-season and training camp to ready for the coming season. This meant that the competition was now better prepared and better conditioned for the long, tough road ahead. Huberdeau was no longer a unknown quantity, a kid teams could not put their finger on. Now they had plenty of video and analysis on how to neutralize his play.

Neutralized seems to be the best way to describe Huberdeau's 2013-14 season. Opponents seemed to just know what he was going to do next and foil any play he was trying to execute. Even his stellar abilities in one-on-one situations like breakaways, penalty shots, and shootouts were not as effective as goaltenders now knew he had only a couple of moves in his arsenal. A concussion sidelined him for a long time towards the end of the season and many fans questioned whether he should be sent down to San Antonio in the American Hockey League to work on his game and earn his way back to "The Show."

If there is anything Huberdeau can be commended for, it's that he continued to carry on despite having so much go against him. He showed attitude by standing up for himself, even going as far as dropping the gloves. He pushed forward trying to make plays happen, despite having been denied so many times before. Based on his play at the 2014 IIHF Men's World Championship in Belarus, that work ethic is paying dividends, as he posted five points (1G/4A) and went +5 in seven games before Team Canada was eliminated in the quarterfinals.

Jonathan Huberdeau is going on his third year in professional hockey in 2014-15. The sophomore slump did hit him hard, however, I believe he has the wherewithal to understand his shortcomings and the drive needed to correct them. If he can come back to training camp with a significant gain in size and strength, then it will be a sign of good things to come for the slick young forward and the Florida Panthers franchise.