Eye On The Cats: Nick Bjugstad

Big Nick took a big step in his first season in the big leagues. Can he follow this up with big progress in his sophomore season? BIG.

Share All sharing options for: Eye On The Cats: Nick Bjugstad 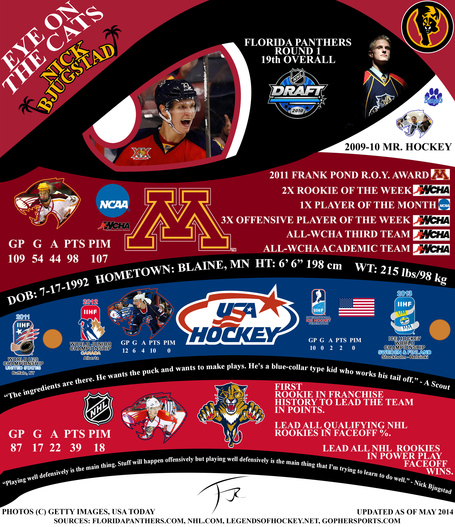 When Nick Bjugstad began to gear up for his first full National Hockey League campaign there was an overlying question: was the super-sized rookie ready or capable to complete the longer, more brutal challenge that is the NHL regular season? Bjugstad had great success playing for the University of Minnesota Golden Gophers, however, the NCAA hockey season is less than half the length of the NHL season. Bjugstad made the jump from the college ranks to the pros towards the end of the 2013 lockout-shortened season. It was after his junior year at Minnesota and it seemed like he was not going to sign his entry-level contract without a promise that he would begin his career in the NHL right away. Apparently, general manager Dale Tallon felt it was worth burning a year of his ELC if it meant Bjugstad would not return for his senior season at Minnesota, putting the Cats at risk of losing the right to sign him afterward.

Bjugstad would have a brief, but impressive showing at the Panthers' annual prospects tournament at the IceDen in Coral Springs. Despite his time there being cut short due to a concussion, Nick showed that he was further along than the other youngsters being showcased at the event. He did hit a rough patch as the concussion hindered his ability to have a full training camp or play in any of the preseason games. It was to be expected that Bjugstad would begin his first full professional season in San Antonio with the Rampage. However, the big pivot's recovery and effort earned him the right to jump right back into the NHL.

Bjugstad centered Florida's second line to start his season (though it was tough at times to determine exactly which line was which during the 2013-14 season). His lack of pro experience was offset by his instincts and his large frame. Many of the young Panthers starting to work their way into the lineup are absolutely huge. So much so that television play-by-play man Steve Goldstein has now routinely added the title of "big" to these young men during the Fox Sports Florida broadcasts. Yet, Bjugstad was not going to find success in the NHL if he did not learn to use his size to his advantage. There are many big players that do not utilize their size advantage and play like smaller players. There are also big players that use their size, but do not have the finesse or speed of the smaller guys.

Bjugstad's performance in his rookie campaign went a long way towards erasing any fears in Pantherland that he would be swallowed up by the NHL's harsher climate. In fact his play in 2013-14 was among the best of all the league's rookies, a point made more impressive when one compares the talent that surrounded the former Golden Gopher in Sunrise to the talent that surrounded Nathan MacKinnon in Colorado or Tyler Johnson in Tampa Bay. Bjugstad was a workhorse for the Panthers, even assuming the role of first-line center when fellow rookie teammate Aleksander Barkov suffered a season-ending injury at the 2014 Winter Olympics. When it looked like the rigors of the NHL's longer, tougher schedule were getting to him, he would not take long to adjust to the challenge. In fact, he never went more than five games without registering a point.

Nick Bjugstad looks to be the big-bodied, point-producing, playmaking center that the Florida Panthers franchise has desperately needed for years. He has stated that he admires the abilities of Joe Thornton and having a player of that caliber anchoring the middle of one of the top two lines for several years would be a welcome sight at the BB&T Center. If Big Nick comes into the 2014-15 as Bigger (and better) Nick, then the only fears coming out of Pantherland will be those of opposing teams and their fans, who will be seeing a monster of a player leading a team ready to start terrorizing their very real present, rather than an imaginary future.