Eye On The Cats: Tomas Kopecky

The Most Interesting Slovak in the World had a not so interesting 2013-14 season. Could it be his last garbed in the palm trees and hockey sticks?

Share All sharing options for: Eye On The Cats: Tomas Kopecky 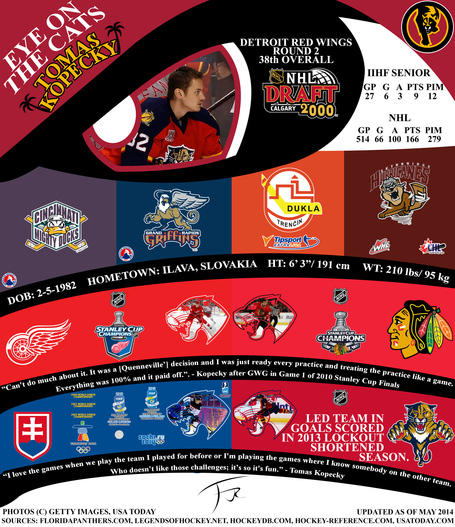 Tomas Kopecky is only in Florida to serve one purpose. Placeholder. Yes, Kopecky is a placeholder for one of the many prospects the Florida Panthers have drafted since Dale Tallon was hired as general manager in 2010. However, he was not always seen as just a mere placeholder or a necessary veteran presence. In fact, on a team with better surrounding talent, Kopecky suddenly becomes much more valuable. Many in Pantherland have reserved themselves to thinking that he is an albatross of a player and the Panthers must rid of him from the organization as soon as possible. I do not believe that to be the best course of action.

As much as the team keeps harping about the future and the sheer awesomeness of the kids already trickling into the lineup, the Panthers are far from winning the Stanley Cup right now. So what is the harm in letting Kopecky play out the final year of his contract? He'll be taking up a spot for a youngster or for a new acquisition or free agent? Just because Tallon now has the ability to make moves freely does not mean those moves should be done frivolously. It's highly unlikely a free agent signing will not be made to replace Kopecky. It will be either a defenseman (or two) needed to shore up the blue line or a top-6 winger to add some scoring punch and help the young forwards. The 32-year-old Slovak is neither of those things.

Kopecky is a role player meant to occupy the bottom two lines. He is nothing more than that. When he is put into that role he does just fine as was shown in his stints with the Detroit Red Wings and in Chicago with Blackhawks. Both of those occasions eventually got his name etched into the Stanley Cup. However, when he was brought to Florida it seems that the success-starved fans of the Cats were expecting him to light up the score sheet and be more than the placeholder and cap-floor filler that he was. Sure, Kopecky did surprising well in the lockout-shortened 2013 season by scoring a team-leading 15 goals, but that campaign was rife with anomalies for a lot of players and teams in the NHL.

It was no surprise to me that he could not keep that kind of scoring pace going in 2013-14, nor should he have been expected to. Almost everyone on the squad had a terrible season and was worthy of being shipped out of Sunrise. Having said that, it is not always smart to just hit the reset button every time that happens. Looking at all the names on the back of the jerseys of fans at the BB&T Center that are not on the roster proves that stability is severely lacking in the Sawgrass. Right now, the Panthers have stability in the organization thanks to a new owner and Tallon's draft-focused rebuild. Having a terrible team is the only way to get better. Last place finishes get the Sidney Crosby's or Jonathan Toews of the world, not heroic ninth place finishes or first round playoff exits.

Tomas Kopecky was not signed here with the intent of him being a piece of a Stanley Cup-contending Panthers team. He was brought in to fill a spot while the youngsters were being groomed to take over. Anything more from him would be welcome in the final year of his contract so that he can be flipped for a draft pick or prospect. That is all I envision Tomas Kopecky being this season. Just a gritty veteran player going to work on the bottom lines and providing the team's prospects time to take his place when they are ready and able.