Eye On The Cats: Tomas Fleischmann

The man known as "Flash" sure looked like his career tanked in a flash. Can he recover or will he be jettisoned out of Sunrise before that happens?

Share All sharing options for: Eye On The Cats: Tomas Fleischmann 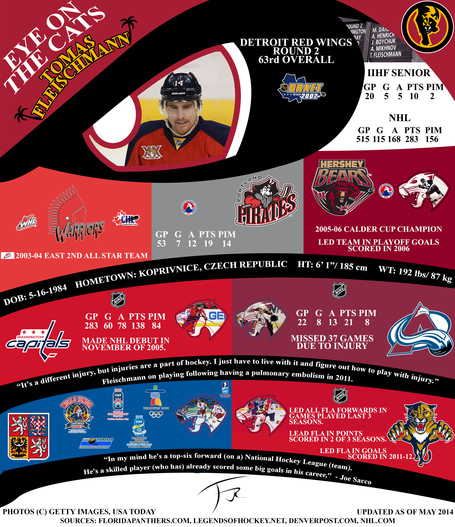 It is safe to say there are several reasons why the Florida Panthers were bestowed the first overall pick in the upcoming National Hockey League Entry Draft. The sudden disappearance of Tomas Fleischmann's skills was tops among them. It what was quite a shock to all in Pantherland, and around the NHL, that Fleischmann was so disappointing in 2013-14. Sure, many of the players that had spent time in Sunrise the season or two prior suffered setbacks of varying degrees, but Fleischmann's snake-bitten season hurt an offense that was already in dire straits to begin the season.

Fleischmann was brought to Florida after his 2010-11 season with the Avalanche ground to a halt due to blood clots. Dale Tallon however, saw the free-agent winger as a diamond in the rough and signed him in the great Floridian cap floor flooding of 2011. All jokes aside, Tallon's confidence in "Flash" having a bounce back season was proven when Fleischmann, along with new acquisition Kris Versteeg and Panthers main stay Stephen Weiss, proved to be one of the most successful forward lines in the league during the 2011-12 season. The skilled Czech led the team in points and goals scored as the Cats won the Southeast Division and made their first playoff appearance in ages.

Following this exciting season came great disappointment for everyone in Sunrise, as the Panthers sank back to the league basement during the 2013 lockout-shortened season. Fleischmann did not have a bad campaign, more of an average one, though the lack of preparation before the season and the crunched schedule makes that assessment open to interpretation. Flash once again led the team in scoring and was its best offensive weapon alongside rookie sensation Jonathan Huberdeau.

After Fleischmann's solid first couple of seasons in Florida, many people assumed he would repeat the process and lead the team's offense again in 2013-14, yet that never happened. He was simply underwhelming. Flash played in 80 games, but posted only 8 goals and 20 assists on 188 shots with a  dreadful -18 rating. He was second on the team in missed shots behind both Brad Boyes and Sean Bergenheim, though both players had more goals scored. Therein lies the problem Fleischmann had in 2013-14. He could not find the back of a soccer net let alone a hockey cage. It was like he forgot to recalibrate his sensors for an entire season. Injury did not seem to be the cause of the sudden drought as he has been up there with Brian Campbell as one of the team's iron men. Maybe the lack of sufficient scoring talent for the team as a whole made Fleischmann ineffective. Huberdeau was almost completely neutralized, Kris Versteeg's lack of work ethic did not help matters before he was shipped off to Chicago, and former head coach Kevin Dineen's game of musical line-mates did not allow anyone to form much in the way of chemistry.

Whatever the reason, Fleischmann placed much doubt in the minds of fans east of the Everglades on whether he is worth keeping around for the final year of his contract. I would err on the side of caution and let him play out his final year. I am just chalking up his struggles to an unfortunate combination of having an unusually down year on a bottom-feeding team. With the possibility of having some reinforcements signed or acquired through trade, you might see Flash rebound and have a fantastic year with NHL-caliber line-mates much like he did in 2011-12. This would also mean avoiding the very Panthers-like act of needlessly rushing a prospect into "The Show" effectively stunting the player's and once-again the team's development.