Eye On The Cats: Ed Jovanovski

JovoCop beat the odds and returned to finish out the 2013-14 season. Does he have the machinery and updated OS to last one more season?

Share All sharing options for: Eye On The Cats: Ed Jovanovski 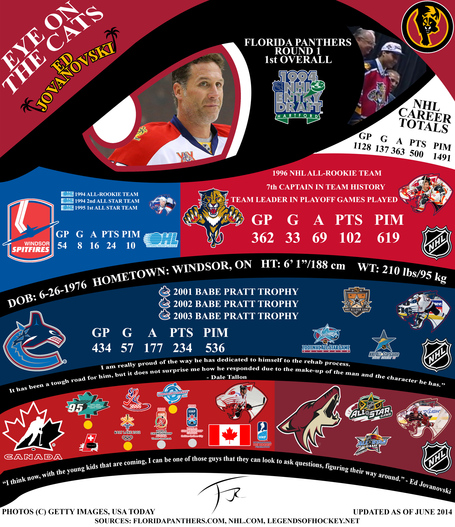 Ed Jovanovski has had a fantastic career in the National Hockey League. After bursting onto the scene in 1996 during the Florida Panthers' "Year of the Rat" season, Jovanovski's play came back down to earth and he was eventually sent to Vancouver as part of the package for Hall-of -Famer Pavel Bure. Jovo's career then took a significant upswing, as he became a stellar defenseman for the Canucks, helping them make four playoff appearances including a Northwest Division title in 2003-04. His time in British Columbia would end when the Canucks spent their 2006 off-season locking up Swedish twins Henrik Sedin and Daniel Sedin as well as making room for newly acquired goaltender Roberto Luongo.

Instead of signing with Florida during the 2006 off-season as was rumored, Jovanovski chose to go to the Phoenix Coyotes so that he could be coached by another Hall-of-Famer, Wayne Gretzky. Jovo once more turned in solid seasons in his stint in Glendale, despite his gradually waning performances and the unstable nature of the Coyotes franchise. With his best years behind him, Jovanovski was more than happy to sign what is believed to be his final playing contract with the team that drafted him, the Panthers. Brought in to mentor and lead, the JovoCop helped the team enough to snatch a surprise Southeast Division title in 2011-12.

Jovanovski's tough-as-nails style of play has made him a force in the league since he first took to the NHL ice at Miami Arena. However this style of play has taken its toll on his body. He has suffered hand, knee, foot, shoulder, ribs, groin, abdomen, and orbital bone injuiries along with the standard nicks and bruises that accumulated over the span of nineteen seasons. His most recent injury to his hip required a radical resurfacing surgery and took almost a year to recover from. He became the first professional athlete to play after having that type of procedure performed. He was the Panthers' nominee for the Masterton Trophy in 2014, but was not named as a finalist.

Jovanovski came back to play 37 games of the 2013-14 season. He had 5 points on 1 goal and 4 assists, a plus/minus rating of -2 and 39 penalty minutes. Many denizens of Pantherland feel that he should hang up his skates now and let the memories of 1996 JovoCop wade over them. However, this is not 1996. That time is over. It ended in failure. In my opinion, Jovanovski has earned the right to play out the final year of his contract and possibly cap what could be twenty seasons at hockey's highest level. He should have a place with the Cats after his playing days are over, but for now let him enjoy the twilight of his career. Let him attempt to be a pioneer in the field of coming back from major hip surgery. Let him end his career in some form of triumph for himself. The Panthers future captain is not ready or maybe not even here yet. Let this captain set sail one last time.