Eye On The Cats: Dan Ellis

Is he really backup-worthy, or is it best to just try to endure whatever time we have with him?

Share All sharing options for: Eye On The Cats: Dan Ellis 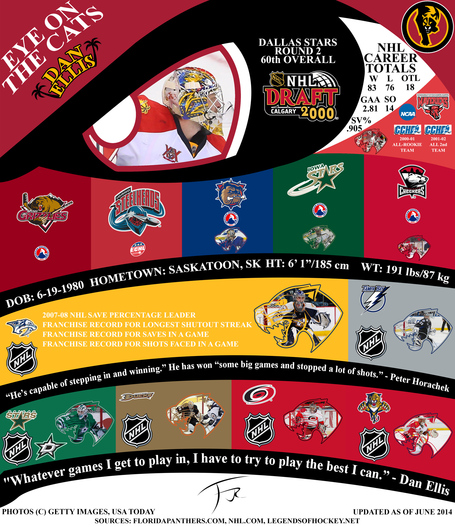 Dan Ellis was brought into the Sawgrass via trade with the Dallas Stars for former Vezina and Conn Smythe winner Tim Thomas. Thomas had requested a move after the Florida Panthers acquired Roberto Luongo from the Vancouver Canucks. For Dallas, it looked to be a reasonable upgrade in the backup category and for Florida general manager Dale Tallon, it removed the potential for tension that a Luongo/Thomas combination might have caused. For Dan Ellis, it did not change much as he has been serving in the role of a backup for several years now.

Florida fans have actually had it pretty well in terms of having a solid backup goaltender in the fold. Scott Clemmensen was solid playing second banana to some excellent and respectable goalies in Sunrise such as Tomas Vokoun, Jose Theodore and Thomas. He even pulled off some notable performances of his own that helped the Cats win the Southeast Division title in 2011-12. However, a goalie cannot do it alone, and Clemmensen fell victim to the Panthers terrible defensive play over the past two seasons. That is not to say that he and his fellow netminders did not have several stinkers in their stat line either.

Ellis however, did not do much to inspire confidence among the folks in Pantherland. In the six games he played wearing the hockey sticks and palm trees, he could only muster a 4.81 goals against average and a save percentage of .836, while losing five times. This has led many fans to believe that Ellis is a downgrade compared to Clemmensen, who was demoted to San Antonio for most of the period after the Luongo trade. Some even prefered having failed "goalie of the future" Jacob Markstrom, who was sent to Vancouver for Luongo.

In the past, Ellis was a serviceable starter for the Nashville Predators in the mid-2000's, but those days are long gone. He has bounced around the map several times, as he is now on his fifth team in four years. The Panthers have him for just a single season and have more pressing money issues to deal with as they look to make a splash on the trade and free-agent market. Buying him out is an option, but backup goaltender is not a serious issue for a team that is under a new coaching system and needs to add more than adequate talent in both the offensive and defensive categories. To me, it is only one season in a year where the Panthers are not expected to completely turn everything around. In the meantime, the Panthers can draft, acquire, or start to develop their next starter and leave the question of backup goalie for the 2015 offseason.