Eye On The Cats: Sean Bergenheim

Bergie missed 20 games yet still provided offensive pop. Can he continue to help spark the Cats?

Share All sharing options for: Eye On The Cats: Sean Bergenheim 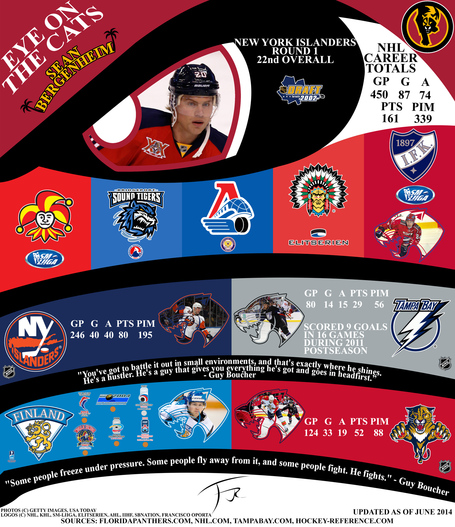 Sean Bergenheim 's 2013-14 season did not start off on the best of footing. The veteran forward was still sitting out due to recovering from an injury he claimed to have sustained prior to the 2012 NHL lockout. This injury required surgery that the Florida Panthers refused to cover, as they believed it had occurred during the two games he played in Finland during the work stoppage, and caused tension between the two parties. Bergenheim was suspended from the team until he was healthy enough to begin training. His downtime crept into the 2013-14 season and caused many in Pantherland to suspect the confrontation between the two sides from the previous season had not been fully resolved

Bergenheim would return to play in late October 2013. His absence did not inspire confidence in former head coach Kevin Dineen, who doubted his ability to come back and lamented the decision to sit out while other teammates, and other players in general, played through injury. Was he correct in staying out until he felt completely ready to return? I certainly believe so.

The Cats have a long history of terribly mishandling the recovery process and keeping players healthy. The 2013 lockout-shortened season should have been the final straw, and put the training and medical staff on the hot seat as players began to drop like flies. The Panthers have routinely been one of the top teams in man-games lost due to injury in the NHL. Losing your best players and not having enough depth in the farm system is a recipe for disaster as the team has been forced, too many times, to ice AHL prospects and lifers against NHL talent.

Now the onus should not be completely placed on the staff alone, as the game of hockey is tough and there is not much anyone can do when players attempt to play through pain and hide their symptoms. The most egregious of the 2013 hospital visitors was Stephen Weiss, the most tenured Panther in franchise history. Playing in a contract year he sustained an injury to his wrist and continued to attempt playing despite being both a detriment to himself and his team. He would eventually require season-ending surgery, and during the offseason, leave Sunrise in free agency for the Detroit Red Wings. He would suffer another injury in Motown and attempt to play through it, before once again succumbing to a season-ending surgery early on.

For these reasons I believe Bergenheim should be commended for not rushing to get back into NHL action. Now having missed a quarter of the season may not be the ideal situation for everyone, as he entered without the benefit of training camp or a stint in the AHL to recover, yet Bergenheim showed that he was both physically and mentally ready for NHL action, as he quickly found amazing chemistry with fellow Finn Aleksander Barkov and surprise success Brad Boyes, forming the first iteration of the "Killer Bs" line. Bergie worked hard on the ice and always seemed to be the one to spark an offensive charge. His performance would not go unnoticed as he was offered a last minute spot on the Finnish Olympic squad. Despite having never played in an Olympic tournament and knowing his Panthers teammate Barkov had accepted an invite, Bergenheim decided he needed his body to continue recovering and declined what turned out to be a bronze medal for the Suomi. Once more, kudos to him for not letting his ambitions exceed his physical limits.

Bergenheim would end up fifth on the team in scoring and continued to click with Boyes and new linemate Nick Bjugstad, who joined them on the second iteration of the "Killer Bs" line after Barkov was injured in Sochi. His decision to sit out until he was absolutely sure he was ready to return may have rubbed many east of the Everglades the wrong way, but it was probably the wisest course of action and one that the Panthers training and medical staff should continue to practice (and be held accountable for) as the number of players and games lost in the past several seasons is ridiculous for a professional sports franchise.