Eye On The Cats: Roberto Luongo

The netminder returned to the Sunshine State that he loves so much in 2013-14. Now he hopes to accomplish something that he never got a chance to do the first time around, lead the Cats to postseason glory.

Share All sharing options for: Eye On The Cats: Roberto Luongo 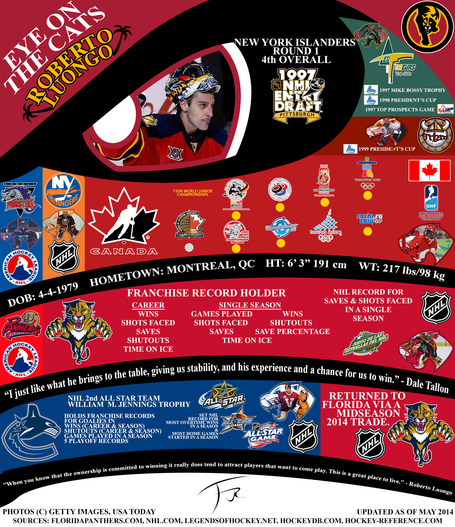 On March 4, 2014 the Florida Panthers sent long-time "goalie of the future" candidate Jacob Markstrom and their longest-tenured player Shawn Matthias to the Vancouver Canucks for goaltender Roberto Luongo. This move completed a two-year saga between Luongo, the Panthers and the Canucks to remedy the issues each party had. The Panthers confidence in Markstrom waned severely after his horrendous performances in the National Hockey League during the lockout-shortened 2013 season and the few opportunities he had in the 2013-14 season. Even his performance in the American Hockey League left something to be desired. This meant that the most important position in hockey was in doubt for the Cats. With a shaky Markstrom, an aging Tim Thomas and a career backup in Scott Clemmensen, something needed to be done.

For Luongo and the Canucks, it seemed the loss in Game 7 of the 2011 Stanley Cup Final destroyed more than just the city. It began a crumbling of the relationship between the goaltender and team management, as questions about his Finals performance lingered long after the loss, seeping into each season afterward. The Canucks had a promising young netminder in Cory Schneider, who had done a fine job serving as Luongo's backup, and looked ready to either usurp him or command a heavy ransom on the trade market. If Schneider became the starter, Luongo's massive contract, which the Canucks gave him in 2007, meant that he would be the highest paid backup in the league. The rumor winds began to swirl around Rogers Arena and it seemed that one of the two goalies had to go. It was Schneider, the Canucks sent him to the New Jersey Devils for a first-round pick to become the successor to Martin Brodeur, much to the surprise of everyone in the hockey world.

The Panthers have long been the doormat of the NHL. Constant mediocre to bottom-dwelling performances over an entire decade will often do that to any franchise. So it was a surprise to find out that Luongo, still a top goalie in the league, wanted to return to Sunrise. His first tour of duty in Florida saw his stock rise, as he was long the shining beacon of some pretty terrible teams. The tone of his entire adult life was set in South Florida, and he still made his off-season home here. For Roberto, Florida was his promised land. General Manager Dale Tallon tried for two years to nab Luongo, but team executives and ownership made his ability to do so impossible. Enter the new ownership of Vinnie Viola and Douglas Cifu and suddenly the Panthers' window of opportunity began to crack open.

Throughout the Vancouver ordeal, Luongo composed himself to the point where he became the sympathetic figure. Vancouver GM Mike Gillis and 2013-14 head coach John Tortorella became the antagonists. Luongo's performance in goal was still solid, however, there were some lapses. The important thing to note about this is that the Canucks were no longer the powerhouse of the Northwest. With the move to the Pacific Division, they could not beat up on lowly Calgary, Edmonton, Minnesota and Colorado to rack up points. Now they had to deal with the deadly California trio of Los Angeles, Anaheim, and San Jose. It became clear that the championship window the Canucks had the past few years was now completely shut and sealed in with bricks. Star forward Ryan Kesler wanted out, the Sedin twins were no longer quite as devastating a force and Tortorella was a mad man behind the bench. Gillis, it seemed, had lost complete touch with his team. Then, the final straw for Luongo would seal the fate of the Vancouver franchise and would make them into an NHL laughingstock.

The 2014 Heritage Classic is the Canadian outdoor NHL game that takes place every two years. The Canucks, dressed in their Vancouver Millionaires uniforms, were hosting the Ottawa Senators at BC Place and despite the outdoor element being removed due to inclement weather, the event was still met with much fanfare. Luongo was excited to start in the game. Earlier in the year, a Stadium Series game at Yankee Stadium in New York had the Devils hosting the New York Rangers. Despite the better play of Schneider, Devils head coach Peter DeBoer started Brodeur as a show of respect to the future Hall of Famer. Tortorella in Vancouver, however, did not have the same sentiments when he decided to start backup Eddie Lack over Luongo since Lack was riding a bit of a hot streak at the time. For Luongo, it shattered his dream and any chance that he wanted to continue playing in British Columbia. A few days later, Tallon and Gillis ended the two-year dance once and for all. Luongo came back home to South Florida.

The Panthers now sit in limbo because of the magnitude of this trade. They have an elite level goaltender that has a few years left to give them a shot at the Stanley Cup. However, as of this article, the club does not have the pieces developed or acquired to make that happen. What Pantherland does know is that we have a committed ownership willing to provide the needed resources, a general manager eager to use those resources, an impressionable young core, a couple of seasoned vets, and a happy Luongo who is looking to bookend his legacy in a spectacular fashion. Surrounding him with the necessary pieces and getting the franchise off of the doormat and through the championship window would make a nice finish to this roller coaster story.