Eye On The Cats: Aleksander Barkov

Sasha definitely impressed in his first NHL season, unfortunately it was cut short at the Olympics. Could the wounds hinder him in year two?

Share All sharing options for: Eye On The Cats: Aleksander Barkov 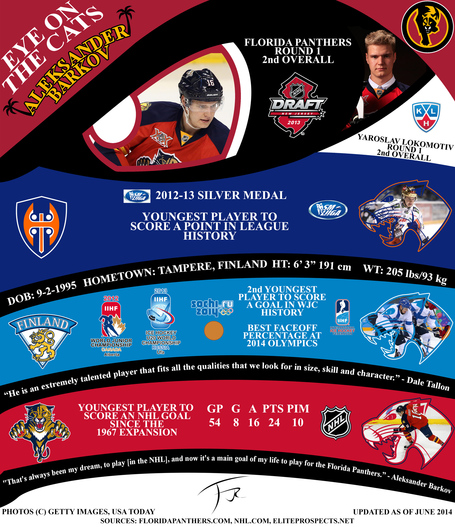 When Aleksander Barkov was selected second overall in the 2013 NHL Entry Draft it was a surprise to many. The Avalanche bypassed the local kid, Seth Jones, in favor of high-scoring forward Nathan MacKinnon. The Florida Panthers were up next and Dale Tallon has been known to heavily favor North American players in the draft, so many were surprise that he passed on both Jones and MacKinnon's teammate Jonathan Drouin in favor of Barkov. The young Finn was projected as the top European player coming into the draft and although he did not hail from the United States or Canada, he did possess certain qualities Tallon could not resist.

Barkov had already played two seasons in Finland's highest level of hockey, SM-Liiga, for Tappara. At 17 years of age, he was already further along in his development than most other players drafted in 2013. Not only that, he was much larger physically in proportion to other players his age. He was also a left-handed shooting center, which was an area of need for the Panthers. Barkov's selection meant that Tallon had possibly given the team an instant center to not only replace long-time now-departed center Stephen Weiss, but also one that could do more than any center the organization had the previous decade before.

Barkov did not take long to show his tremendous upside, as he scored his first-ever NHL goal in his first official game against the Dallas Stars on opening night of the 2013-14 season. In doing so, he became the youngest player to score a point since the 1967 NHL expansion. His size made him a natural at center, but his instincts also showed signs of his advanced maturity. For many associated with the hockey sticks and palm trees, Barkov's performance rarely cost the team. If anything, he did his best to be in the right place at the right time both on the offensive and defensive end. For many using the eye test, it seemed like Sasha was going to be all right for the Panthers.

This sentiment was shared by the Finnish National Team's officials as Barkov was selected to represent that country in the 2014 Olympic Winter Games in Sochi, Russia. If that wasn't enough, the youngster was even placed on a line with future Hall-of -Famer Teemu Selanne, showing the confidence the Finns had in Barkov, and also spoke to the validity of his advanced development. Unfortunately, his first Olympic journey and inaugural NHL season were abruptly ended when he suffered an injury early during play in the group stage. Despite sitting out the rest of the tournament back home in Florida, Barkov received a bronze medal after the Finnish team defeated the United States to finish third.

Though many in Pantherland were saddened by Barkov's shortened season, he did garner enough goodwill and hope to make fans anxious to see him healthy, so that they can witness him and his other young teammates grow together and prove themselves in "The Show." I already believe he is the smartest player on the entire team and that distinction will become even more evident as the young Finnish pivot gains experience.