Eye On The Cats: Scottie Upshall

Uppy finally proved his worth to the Panthers in 2013-14. Is he indispensable for the coming season?

Share All sharing options for: Eye On The Cats: Scottie Upshall 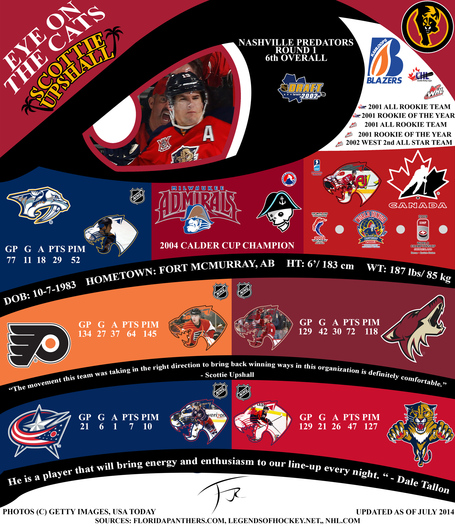 Scottie Upshall surprised many Panther fans with his 2013-14 performance, the biggest reason likely being that he stayed healthy enough to play 76 games. Since he signed with Florida during the whirlwind acquisition period of 2011, many observers believed his contract to be an albatross since the first two seasons of his four-year, $14 million dollar contract saw him missing 56 games in 2011-12 and 21 games in the 48-game lockout-shortened 2013 campaign. Upshall tends to employ a high-energy style of play with the bite of an agitator and when healthy is usually good for 15 goals a season. Cats fans finally saw that in 2013-14 as he was one of the roster's few reliable veteran highlights.

Alongside other forwards inked in the 2011 offseason, Tomas Kopecky and Tomas Fleischmann, to name only two, turned in lesser performances than they had in the previous two seasons with Florida. As a result of this and the appointment of interim coach Peter Horachek - who had a history with Upshall dating back well over a decade - "Uppy" earned an assistant captaincy. His enthusiasm and fervor on the ice was a welcome sight for those in Pantherland accustomed to veterans coasting and collecting a check.

Upshall now enters the final season of his current contract. Based on not only last year's results (15G, 37P) but the cumulative effect of his having a leadership role on the roster, it should not be surprising if new head coach Gerard Gallant nails an "A" on his chest for 2014-15. A player who wears his emotions on the sleeve, Upshall thoroughly enjoys South Florida, and may even benefit from a few more veterans surrounding him on the third or fourth line.

The possibility of his being a somewhat valuable trade asset cannot be ignored if his stats remain similar to a year ago, in case the Panthers look to be heading into March planning their April vacations once more. Either way,  Upshall appealed to many fans simply through his positive attitude: on a club with so many young men adjusting to life in the NHL that is an extremely valuable asset.