Eye On The Panthers: Brad Boyes

Cast aside by 29 teams and reduced to a PTO, Boyes revived his career in the sawgrass during 2013-14. Will he bring more goodness to the Cats in the coming year?

Share All sharing options for: Eye On The Panthers: Brad Boyes 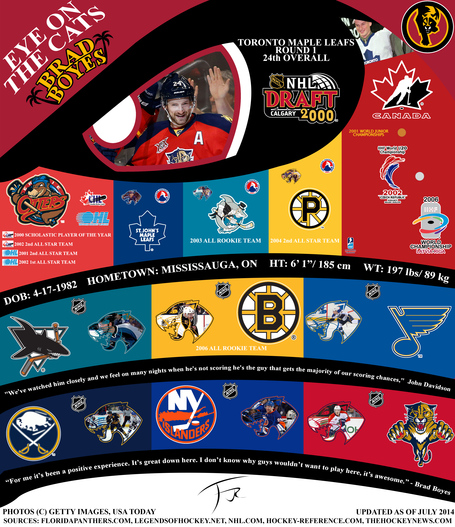 Possibly one of the more heartwarming additions to the Florida Panthers in recent years could be that of right wing Brad Boyes. Signed as part of a slew of veterans given professional tryouts in last-minute fashion late in September of 2013, pundits expected little from the former 72-point scorer even after a career rebirth only a season earlier with the Islanders (10-25-35P in 48GP). Since the organization was in limbo due to a pending sale to the Viola/Cifu group, general manager Dale Tallon was forced to wait until the final days of training camp to fill out a somewhat NHL-ish roster cobbled together with prospects and several (ultimately shrewd) free agency pickups.

Boyes kicked off the season by punching in 5 points during his first five appearance, establishing himself as one of Florida's few offensive weapons during not only regulation time, but in the shootout as well. He currently remains one of the best in the league during the skills competition since its introduction in 2005. As 2013-14 wore on, Boyes developed a rapport with his alphabetically similar surnamed teammates: Sean Bergenheim, Aleksander Barkov, and, after Barkov's season came to an end due to injury in February, Nick Bjugstad. This quartet of players formed two variations of the "Killer B's" line, the leading offensive force on a club woefully lacking in said category.

When the NHL's 2014 trade deadline began drawing near in March, it was believed Boyes would be one of the many Florida veterans who would be changing addresses to clubs looking to add that missing piece for a playoff run. Despite shipping off Marcel Goc and Mike Weaver, the Cats decided the winger was worth retaining, not only for the duration of that year, but for the next two seasons to follow. This commitment to Boyes, along with the mammoth trade for G Roberto Luongo, would be the beginning of the Florida Panthers' rise from cap floor team to cap ceiling team (in progress) as evidenced by recent signings made during the currently ongoing 2014 free agency period.

Brad's evolving journey in Pantherland is one that should bring a smile to the face of any hockey fan. A skilled player who had fallen out of favor elsewhere given a chance to show he belongs, and a team desperate for his services. Both parties came through.