How does the middle of the Cats' lineup stack up against the rest of the league?

I've been looking at a lot of information lately, trying to best piece together what we can expect from the Florida Panthers for the upcoming season.  With that in mind, I'll be giving a rundown of how the Cats stack up at each position before giving a final prediction that will most likely end up being way off at the end of the 2014-2015 season.

The Panthers were pretty active during the offseason, signing a number of players, including two new centers that will look to fill depth roles on the team.  Looking at the projected roster for next season, it's pretty cut and dry who will be lining up at the face-off dot coming out of training camp.

I don't think there's really much contention with that.  There's a small chance that a prospect surprises everyone, but for the most part I think that this is pretty much self explanatory. All stats at 5 on 5 close, courtesy of extraskater.com.  dCorsi courtesy of Steve Burtch of PPP. For LBC's glossary of advanced stats click here.

Barkov is going to be very good when he reaches his ceiling.  Last season was the first of what is likely going to be a long NHL career, and he certainly impressed in it.  He did have a negative CorsiRel, but taking context into consideration in the form of dCorsi, Barkov is actually a positive possession player, as he performed well in the minutes given to him.  His Expected Corsi of 0.99 was the second highest on the team, which means that he performed well, but keep in mind he also had the second "easiest" minutes on the team. Regardless, I don't see too much concern for Barkov, and he should fill the No. 1 center role quite well.

(*dCorsi Notes: Know this; it takes into account as many factors as Steve could come up with, and uses them to calculate the value.  Stats guys talk all the time about accounting for context; dCorsi does exactly that.  **dCorsi still isn't perfect.  I think Burtch is working on tweaking the formula, but the biggest error I see is the accounting for TOI.  Guys who clock tremendous minutes see their ExCorsi rise a tad more than it probably should, which results in guys like Jonathan Toews, Drew Doughty, and Brian Campbell having lower dCorsi numbers, while guys like John Scott, Colton Orr, and Krys Barch have rather inflated numbers)

Holy low PDO.  Bjugstad doesn't really impress me in the Corsi department, as he had the highest ExCorsi and still had a negative dCorsi rating, but wow.  OISH% is a luck stat to a degree, as guys who are good WILL have higher numbers, and guys who are bad WILL have lower ones.  But 4.9% puts Bjugstad on the same level as enforcers like Luke Gadzic, Shawn Thornton, Krys Barch, and John Scott.  It's almost a given that Bjugstad sees a rise in that, and though he may not push the Corsi needle, the kid put up 38 points with an OISH of 4.9%.  Put that at the league average of 8%, and he probably has around 60 points.  I'm not saying his OISH% will be at the league average next season, but if it gets close we could be looking at a 50 point season, and I would take a 50+ point season from Bjugstad.  Give him linemates who can finish, and I think Bjugstad really fulfills the second line role next season.

I'm not really impressed with Bolland; to say that he did well because of his dCorsi wouldn't really be correct. Sure, his ExCorsi is low, but I think that is more of a result of the facts that 1) he played for Toronto and 2) the TOI issue I had mentioned earlier. Were there better options for the position? Most likely. Will Bolland be able to hold his own? Probably. Also, I feel the Panthers have excellent options among third line wingers. Bolland might not be an asset, but he probably won't be too much of a liability. It's not like he's going to ruin the team.

(Note: Bolland is interesting because his possession numbers aren't bad, but his PDO is.  It's almost 3 points lower than his team's at 5 on 5 close.  I think that the Maple Leafs system certainly had an influence on this. Bolland tried to play the possession game he's used to in Chicago, though the system Randy Carlyle wanted Toronto to play focused more on sitting back and protecting the net.  I believe that Carlyle's system elevated Toronto's PDO, though it sacrificed immensely on possession.  Bolland played the possession, but lost out on the PDO "bonus".  I would much rather have the possession than the PDO, as possession is a lot less based on luck.  Still, I wouldn't say this helps Bolland's cause, as he wasn't too impressive in his stats on the dismal Maple Leafs team.  Like I said; he's not going to be a huge on ice asset.  But, for next season, he certainly won't ruin the team.)

MacKenzie gets a "meh" from me.  He'll get the job done as a fourth line guy.  He posts generally tougher minutes (negative ExCorsi) and manages to hold his own.  His OISH% is low, as expected, and it probably won't go up if he plays with guys like Thornton.  The biggest plus for MacKenzie comes from his penalty-killing skills.  The Panthers were remarkably bad at that last year, and MacKenzie has had positive GD/60 Rel the past three years (Goal Difference per 60 min of ice team).  I would rather have a guy who can do something beside not get scored on, but MacKenzie will do.

I'm not going to say that the Panthers' center corps is good, though it would certainly be wrong to say it's bad.  I feel like they will be able to hold their own against the majority of teams in the league, and dominate certain teams that are very weak up the middle.  A few of the powerhouses in the Western Conference will dominate them, but they won't get killed night in and night out.  A couple of lucky bounces, high PDO, and good usage could put them in the top half of the league.

That being said, I weigh the vast majority of how the Panthers do next season on the development of Barkov and Bjugstad, and on new coach Gerard Gallant.  Part of why Chicago is so good?  Look at their player usage chart. 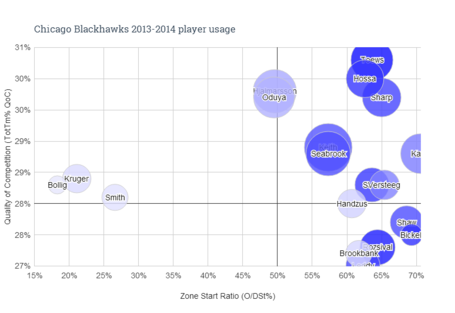 Conclusion?  Bollig, Kruger, and Smith get the puck out of their zone.  Pretty much everyone else focuses on scoring.  Bolland had a role similar to that in Chicago, and although he probably isn't able to do it as effectively as a member of the Panthers, it's probably the best role for him within the team.  If Gallant can figure out how to best use the talent he's been given, and there actually is quite a lot, then the Panthers should be able to make the playoffs.  Figuring out the centers will be key; after all, wingers can't score if they don't have someone to help them push play up ice.

Lastly, I would be pleasantly surprised if Drew Shore or Vincent Trocheck managed to crack the pro roster over Bolland or MacKenzie.  Both have impressive numbers, albeit over small sample sizes, and I would love to see more of them.  If they truly aren't ready, they can always be sent back down to San Antonio for another season.  For those who think that $5.5 million is too much to spend on a fourth line center, I have one point to make; Mike Richards.  The dude was LA's fourth line guy for most of the playoffs, and he makes $8.4 million.  Money shouldn't decide the depth chart.  Hockey ability should.