Observations from day one of Florida Panthers Prospect Camp

The Cats kicked off prospect camp at the IceDen in Coral Springs today.

Share All sharing options for: Observations from day one of Florida Panthers Prospect Camp

If, as a long suffering Panther fan, you were looking for some type of mystic symbolism for the forthcoming season, Prospect Camp day one in Coral Springs would not disappoint, as a tropical low dumped inches of rain on the mornings' commute to Panthers IceDen and thunder rumbled across the parking area. Oh, ominous tidings... But upon exiting at the conclusion of today's doings, clear skies and gorgeous weather. Folks, the signs are promising....

On to business. The coaching staff ran an uptempo exhibition with an initial 4-on-4 small area possession game inside the zone with a stripe painted down the middle of the ice. Each team had a side of the zone they had to attempt to possess the puck in. This transitioned into a full ice attack by one player at a time with one, and then two players waiting in front for rebounds or tip-ins. This was followed by the same drill with an outside-inside stick-handling component down the ice (one could see who the "hands" prospects were). Quick chip and go breakout and entry moves were next, followed by goal line attacks on net. Day one concluded with a breakout into offense, defensive re-group attack, pass to the point drill.

-Goalies were hard to judge, no real defense in front of them, so just pure entertainment.

(photo quality is obviously poor, I am no Ansel Adams!) Clarke Saunders: 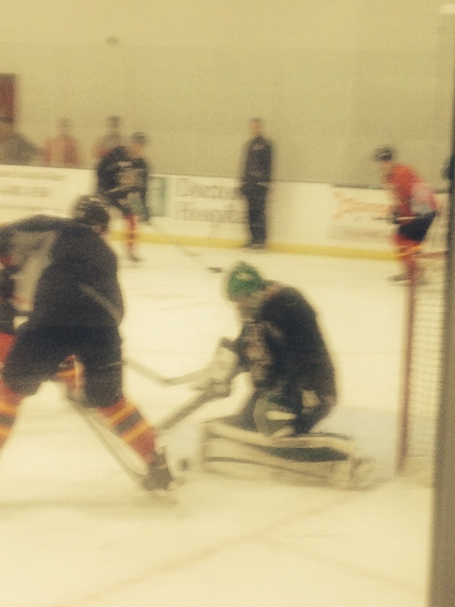 - Unsure of the reasoning, but Coach Gallant kept Vincent Trocheck, Connor Brickley, and Jonathan Racine on the ice to chat while others left.

- Rocco Grimaldi impressed with quick changes of direction, he truly is an exciting player to watch. The heartbeat quickens every time he does something that catches you off guard. The only part of him that was less than impressive was his shot, but hey, its day one.

- Jayce Hawryluk is smaller than I realized, but in the 4 on 4 possession drill he truly showed what he is about as his attacks on the boards almost always came away with regained possession

- Liam Heelis did not look as good as the other players in the skills and skating, but whoa- that mustache would make Burt Reynolds jealous.

- Stephen Vigier is also on the small side

- Andrew Blazek is big, here he is with Rocco: 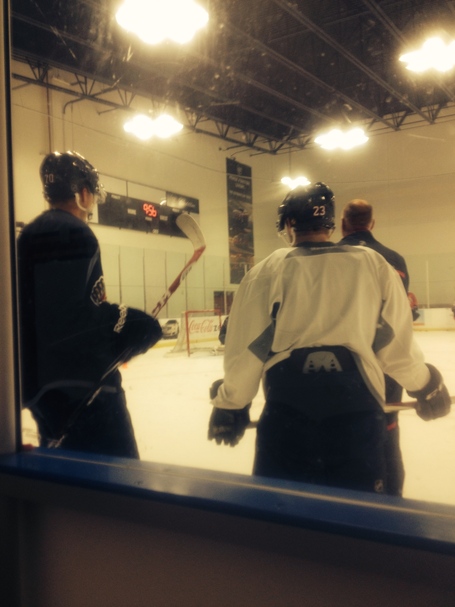 - Joe Basaraba and Connor Brickley play a similar large frame, uptempo attack game, but both lack the hands of the higher end prospects. Here is Brickley: 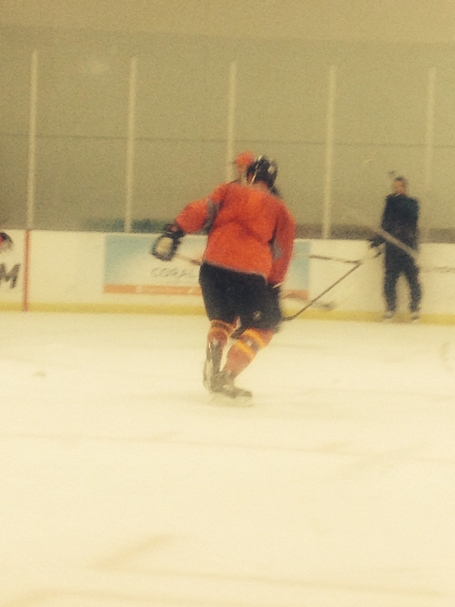 - If you were concerned about Rocco Grimaldi's attitude, don't be. He worked hard and was the player cleaning up pucks at the end of day one.

- The players like Coach Skrudland; always a bit of advice, a playful bump or slap, and a smile.

- Stephen MacAuley is fast, that part stood out.

- Trocheck really stood out in the small area game. He is very smooth, obviously higher end than most, and is always on the puck, moving it quickly and effectively without flash.

- Nothing particularly noticeable about the defense as they did not do any true defensive drills or scrimmages, so no real observations of their prowess.

Steven Hodges waits for a rebound from Sam Brittain that never came: 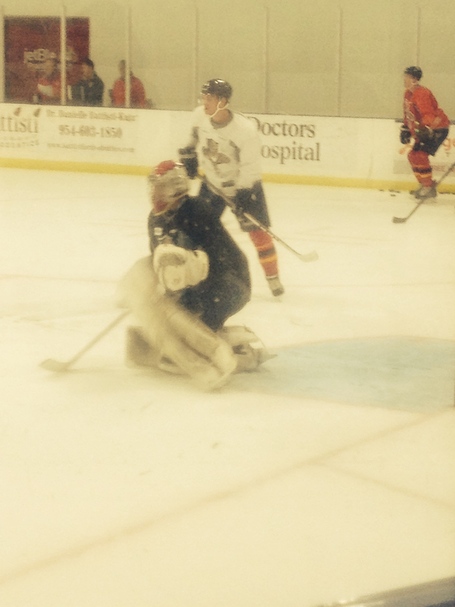 Now its off to Tennessee for the bunch. A special good luck to Broward County's own Cody Payne who got the invite to prospect camp. You can't help but pull for this homegrown prospect. 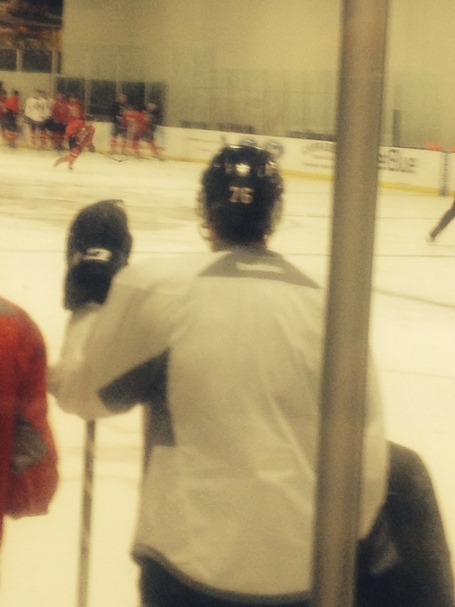