Now that we've been over half of the wingers on the Panthers roster, let's take a look at the second group and draw some final conclusions on what the best options may be for the club next season. 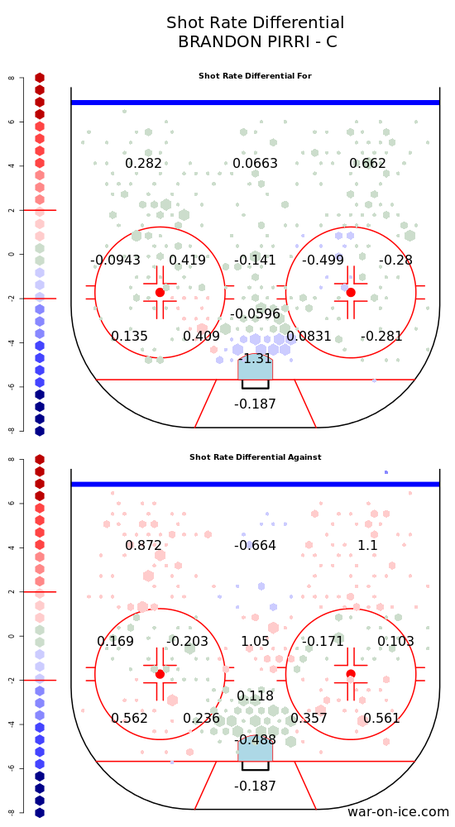 Unfortunately, there's not too much data for Pirri, and it doesn't look reassuring at all.  Most of his scoring last season didn't come at score close, which explains the low SN.  His Corsi numbers are also unimpressive, and his Hextally shows that he's not producing tons of shots, and produces even less in the high scoring areas.  This makes Pirri a bit of an enigma (even more so than a Russian...).  He clearly has second line potential, but has failed to show much of it.  He has the tools to slot in and be a productive player, but he may find himself consistently out of the lineup, or down in the AHL.  Figuring out the best use for Pirri may be one of Gerard Gallant's hardest challenges throughout the season. 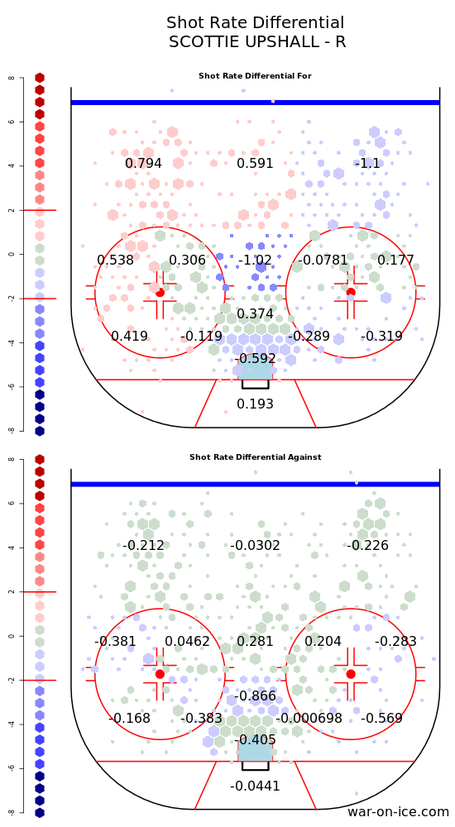 Upshall performed very well last season.  He had good (borderline great) Corsi numbers, and had a good SN.  His SN does fluctuate from year to year, though, so it being positive this season may not necessarily indicate skill on Upshall's part.  His RelExp. GF% really shows that he was a positive force for the Panthers.  He did have a high PDO, so it may be safe to assume that his point totals don't stay at the same level for next year.  Having him on the third line is probably the most conventional use for him, though he could also help make the second line well-rounded.  The scare with Upshall is that his dCorsi graph looks like the Rocky Mountains; it goes up, then down, then up, then down, then back up.  If the pattern stays consistent, he's set to have a down season in 2014-2015.

As for his Hextally, Upshall is unique.  He's doesn't generate too many shots for his team; instead, he represses shots for the other team.  This would suggest that he might be best in the shutdown role on whichever line gets that role (conventional wisdom says the third line, the "Chicago Model" that I want the Panthers to employ says it's the fourth line).  Regardless of which line it is, placing Upshall in that role might be beneficial, as he's more effective in the defensive end than he is in the offensive. 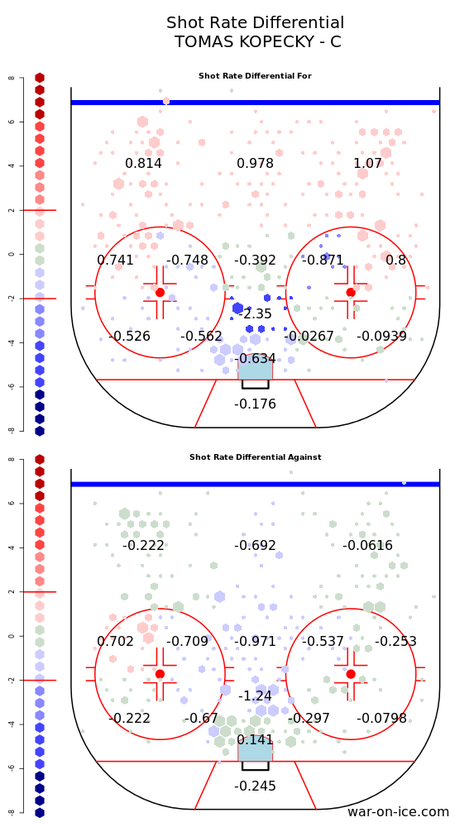 If Kopecky would have had the same PDO as Upshall last season, the two would have almost identical seasons.  They both had good dCorsi numbers (Upshall's fluctuate, Kopecky had a career year), and they both had good RelExp. GF numbers.  Even more similar, they both are good at shot repression over shot generation.  Fitting both of them in on the shutdown line, next to a good, Corsi driving center (uh, Drew Shore, anyone?) could be just absolute hell for opposing offenses to work against. 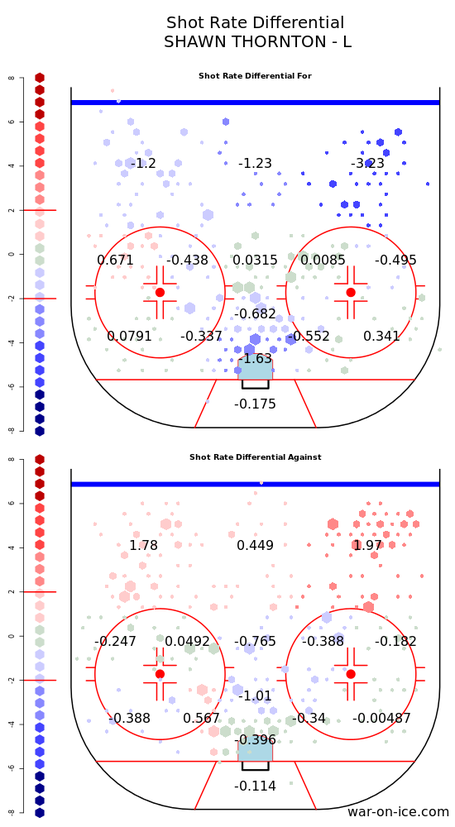 Thornton isn't the hockey player he used to be.  He's going to be a great presence in the locker room.  He's going to lift guys spirits and he's got loads of character.  But I really hope that coach Gallant does not consistently have Thornton in the lineup.  He can keep shots to the outside, which is nice; but he still lets a lot of shots from the point get through, and he generates close to absolutely nothing on offense.  Again, his character is good, and there's no denying that he's going to be a great locker room presence, but the hockey just isn't what it used to be. 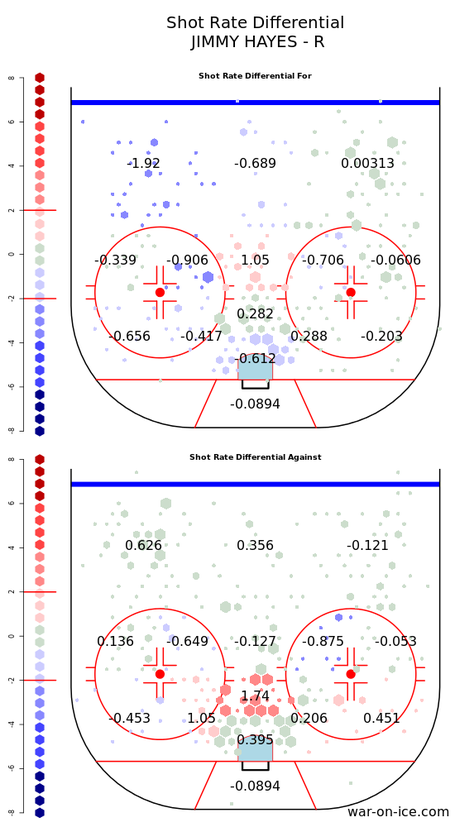 Yikes.  Before the Panthers signed Hayes in the offseason, I looked at him during the RFA roundup, and came to the conclusion that even though he had terrible Corsi numbers, he had a Corsi For % of 59.0% in the final ten games of the season.  Whether that was just a fluke, or a sign of a turnaround in play, has yet to be seen.  Regardless of how the Corsi pans out, don't expect Hayes to have a high SN again.  Even though it's clear that the shots he takes are in high scoring areas, he isn't good at generating shots in that area (as shown by the Hextally).  He also lets up a high concentration of shots down low in his own zone, and the combination of poor Corsi, and poor shot quality, lead to his very poor RelExp. GF%.  Hopefully Hayes develops, but right now it looks like he would better serve the team either in the press box or down in the AHL.

Note: I can produce any Hextally charts I didn't get to in the post in the comments.  Just ask.

The Panthers have 10 choices to fill in 8 winger roles headed into the season.  Unfortunately, it's very likely that two of the three (Pirri, Thornton, Hayes) I mentioned are potential press box candidates and may end up not being capable of handling a role in the lineup.  If that's the case, then that really leaves the Panthers without too many options, especially if the injury bug starts to bite the team.  The team would be forced to roll two effective offensive lines, a shutdown line, and a borderline useless fourth line, which fits into the conventional model for a hockey team, but not into the more successful Chicago (or, to an extent, Los Angeles) model.  The decisions then, truly do abound for Gallant, as he has to figure out the best way to juggle the line combinations and get the team playing the best hockey possible.

My ideal lineup would look along the lines of this; I understand it's not likely, but I did say my "ideal" lineup, and not my "prediction" for the lineup. This follows the Chicago model of three offensive lines, and one shutdown line.