Lots of bodies mean decisions need to be made...

I have been looking at a lot of information lately, trying to best piece together what we can expect from the Florida Panthers during the upcoming season.  With that in mind, I'll be giving a rundown of how the Cats stack up at each position before giving a final prediction that will most likely end up being way off at the end of the 2014-2015 season.

We've already been over the center position; now we take a look at how the wingers stack up.  This is the position where Dale Tallon and Gerard Gallant really have their work cut out for them.  There are ten potential players who can step up and take positions in the lineup.  With four lines, that only leaves eight possible openings, so either two players will be healthy scratches, or have press box views of the majority of the games.  At least there will be people on hand on the pro roster to fill in for the injuries that are bound to occur throughout the season.

(The stats I'm using here are a mash up taken from waronice.com and progressivehockey.blogspot.ca.  Progressive Hockey uses a regression to account for score effects, while War On Ice has 5 on 5 score close available.  War on Ice also features the Hextally App, which allows us to look at shot location.  dCorsi courtesy of Steve Burtch of PPP.  For LBC's glossary of advanced stats click here.) 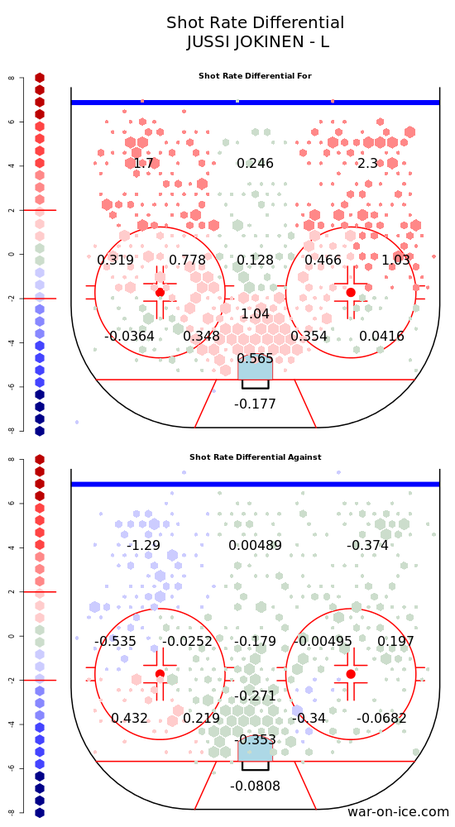 This was a great signing by Tallon.  His point totals may be a little high from playing with Evgeni Malkin, and he may have gotten a bit lucky (101.4 PDO), but overall, Jokinen has a lot of positive numbers.  His SN shows that he's got some finishing ability, and it's been positive for the past couple of seasons.  He is getting up there in age, but I really don't see reason to be pessimistic about the signing.  If Jokinen plays with Barkov, (who, on a side note, is incredibly good; he put up the third highest Exp. GF% on the team last season, as an 18-year-old rookie) then there definitely is hope that the two can form a very efficient line.

As for his Hextally, it looks like Jokinen was adept at generating shots near the net (as well as at the point).  Shots right in front of the net have the highest shooting percentage, so the more from that area the better.  On the defensive side, Jokinen's point (as a left winger, he most likely is responsible for covering the left point) shows that he does a good job of shutting down shots from that area.  All in all?  A great addition to the roster. 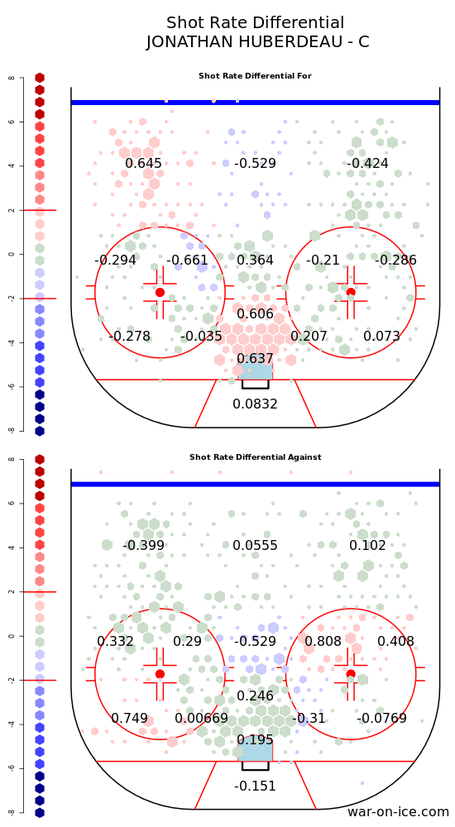 I fully expect a bounce back season from Huberdeau.  His numbers aren't impressive, but he's a playmaker.  He's probably not going to have positive Corsi numbers, or a high SN number, however, looking at his Hextally shows that he produces shots in the high-percentage scoring area. Given the right teammates and usage, he could really blossom into a star.  It's just up to Gerard Gallant to figure out who those linemates are (looking at dCorsi may help...) 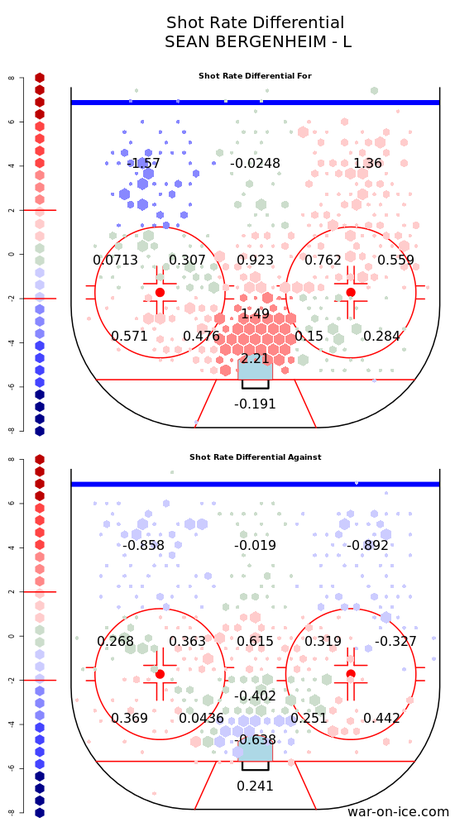 Sean Bergenheim is ridiculously underrated.  His numbers are through the roof ridiculous, given the fact that he's considered a fringe third-liner.  The only reason he didn't put up crazy numbers last year is his PDO.  Given a year where he can play with quality teammates (hint: Barkov, Jokinen), the numbers should be great.  Even his Hextally shows what I've been saying for a while; he produces a great number of shots in the high scoring areas, AND keeps his opponents from getting shots in those same high scoring areas.  The only knock?  He doesn't score like the rest of the NHL around the net; his shooting percentage in the upside down "U" in front of the net is much lower than the league average. 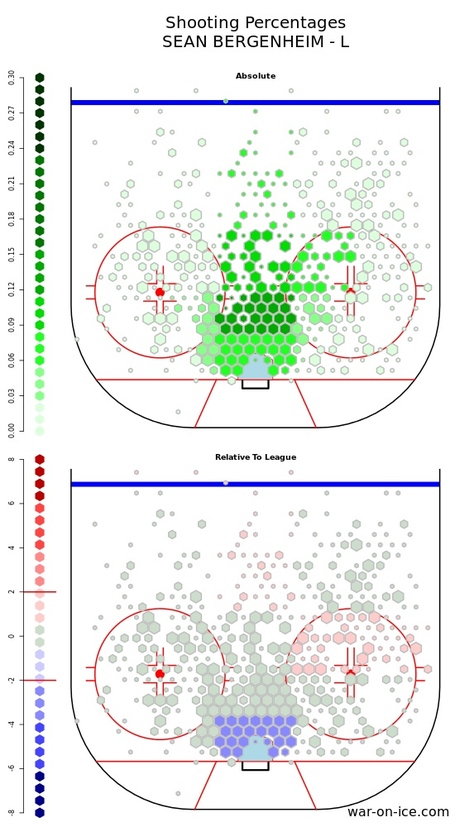 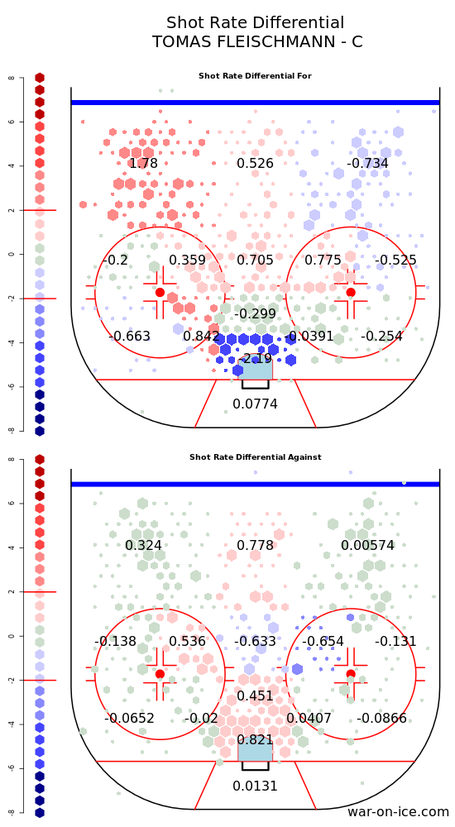 Lots of shots, but not necessarily in the right places.  Now that I have all the data on Fleischmann, I'm going to have to go back on what I said earlier in one of the Caterwauls.  It's still possible that Flash could have a bounce back year, and put up points.  I'm not too optimistic that will happen now, especially since I see that he didn't produce shots in the high-percentage scoring areas last year.  Throughout his career he's had a higher shooting percentage than the rest of the league outside of the slot, but he could be on the downswing now and that may not be the case anymore. 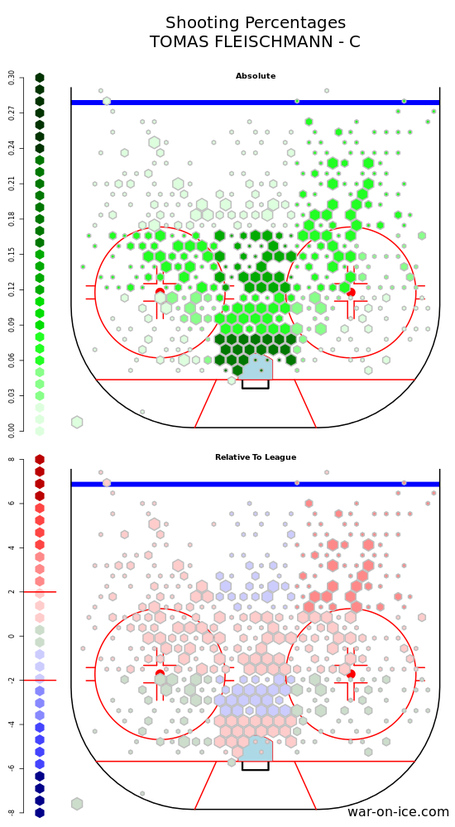 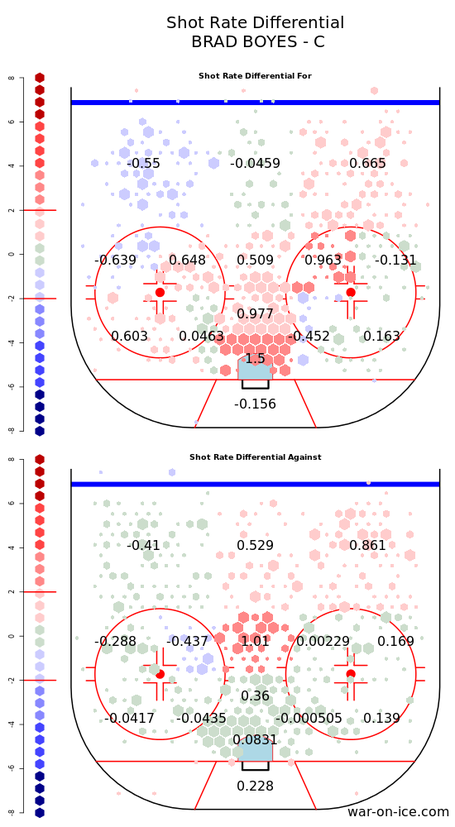 Boyes is another I had talked about in an earlier Caterwaul (I had actually argued for Fleischmann over Boyes, something I see now was pretty wrong).  His Corsi still isn't too impressive, and his SN was the highest it's been over the past couple of years (expect some regression), but it's clear from his Exp. GF% that he's probably a little bit better than Fleischmann.  Also of note are the two red marks on his Hextally; on offense, he's best at generating shots directly in front of the net.  On defense, the shots came from higher up in the slot, which can be dangerous based on the shooter (but generally preferable to the lower slot).  Also, Boyes' shooting percentage map shows us something interesting; he clearly has a preference for shooting on his off-wing, down near the hash marks.  It might be worth it to switch him to left wing for 5 on 5 play, and if Gallant doesn't at least try him at that spot on the power play, he may be missing out. 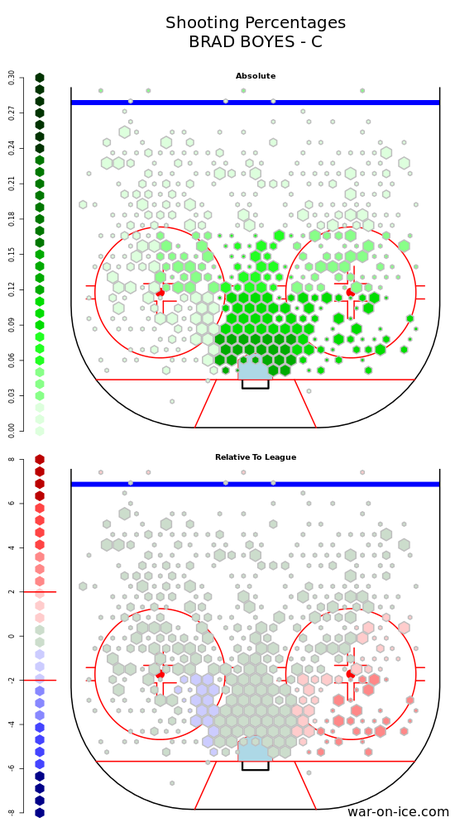 These are the "top five" Panthers' wingers, based off of conventional wisdom headed into the season.  Obviously there's going to be changes made throughout the season, but it's not unlikely that four of these five end up on the top two lines.  The lines will probably vary based on how Gallant wants to run the team, but I personally would like to see the "Chicago Model", meaning that there are three lines that focus on scoring.  These lines would get the easier zone starts, and usually match up against the opponents lower lines, to get the best matchup available.  The fourth line becomes the shutdown line, and usually has a face-off specialist, and other players who's main job is to shut down the opposition and get the puck up ice.

Just as a note, I can produce any charts/Hextally visualizations that I didn't get to in the post (there are a lot of them as is.) Just ask in the comments.